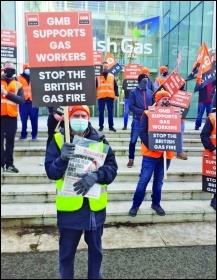 On their 43rd day of strike action on 14 April, hundreds of GMB members in British Gas were facing the sack after refusing to agree the imposition of new contracts. Car transporters were filled with blue company vans - a sign of the brutal fire and rehire bludgeon of the bosses of British Gas and its privateer corporate owner Centrica. Behind each van there is a worker with a family.

The workers will now discuss the way forward, and what further action can be taken, but GMB members, mainly 7,500 service engineers out of a total workforce of 20,000, have fought hard to defend hard-won terms and conditions from attack, which could see some lose up to £15,000. This is even more impressive after the other three unions - Unison, Unite and Prospect - had accepted a negotiated settlement, to leave the GMB to fight alone.

The highpoint of the dispute was at the beginning of March, when members rejected the company's 'offer' by a massive margin, up to 80% in some sectors, despite the union mistakenly not giving a recommendation. That could have been the moment to escalate the dispute, possibly to all-out action.

The imposed new contracts will mean full-time engineers forced to work 40 hours a week, an increase of three hours, and lose premiums when needed to work weekends and public holidays. Yet as strikers have said, how can the management justify these attacks, when the lockdown has meant more demand for gas as people have had to work from home? They know this is about boosting profits.

Like so many other companies such as British Airways and British Telecom, British Gas bosses think that the Covid crisis has shocked workers and sense an opportunity to use 'fire and rehire'. It won't be lost on workers in these companies that they were all once publicly owned, and were privatised by the Tories. The unions must campaign for them all to be renationalised as part of their disputes. This is particularly important given the scale of the Covid crisis.

To this infamous list should be added the Labour council of Tower Hamlets, who provoked a Unison strike last summer through the same vicious methods. And in all these companies and many others, including Go Ahead buses in Manchester currently on indefinite strike, workers have fought back with determined action.

However, what has been lacking is the unions involved in these disputes attempting to co-ordinate across all the employers, in order to develop a united front that builds workers' confidence as well as levering pressure on the Tories on 'fire and rehire' - rather than just parliamentary petitions.

Action has often pushed management back or at least won significant improvements. And it is always better to have fought an attack rather than immediately agree concessions. It issues a warning to management about any further offensive, and even if workers suffer a setback, if action is taken, at least it has more chance of keeping the union intact and creates a fighting record in the workplace. Whatever happens now in British Gas, the action that has been taken will force the bosses to think very carefully about more attacks.

The GMB has done well to build the dispute during Covid-19 and its restrictions as well as the practical challenges that have been presented, because most, if not all, the depots have been closed over time. This has often seen workers pick places where they can protest and be visible. However, the deadline day marks the critical stage in the dispute.

The union recommended that workers should sign the new contracts, to protect themselves from dismissal, but continue the action. However, this had potential risks in leaving some workers isolated, if not properly explained and members sufficiently prepared.

The GMB has said that action will continue, through strikes and action short of strikes. But it is essential that it calls a national meeting of the British Gas reps and then one for the members, where there can be an open discussion about how the fight continues. This is needed to keep members together.

On 14 April, the union called protests of striking workers outside British Gas offices. This could be developed, particularly as Covid restrictions lift. They could call another national strike, with regional protests, including outside parliament. This could be used as a platform to escalate the action.