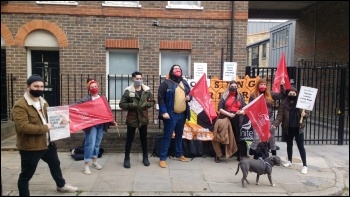 The strike at lettings tech platform Goodlord has forced bosses into talks at mediation service Acas. Members of general union Unite in the tenant-referencing department are continuing their indefinite stoppage to restore the London Living Wage.

Meanwhile, the action has compelled the Living Wage Foundation to disaccredit Goodlord. Angry strikers are determined not to let management get away with it.

Regular picket lines at the office in Spitalfields, east London have received some visits from the establishment media, but with little published. The strike marched noisily through Brick Lane on 30 April to publicise the dispute. "We say no to: fire and rehire! You say Goodlord, we say Badlord! We want the living wage - when do we want it? Now!"

Socialist Students activists have collected sheets and sheets of solidarity signatures from University of the Arts London students. On the same Friday, they visited estate agents in Camberwell, south London, demanding they not use Goodlord during the strike.

Now is peak time for students seeking accommodation. Students' unions should make public statements supporting the strike and calling on estate agents to withdraw from Goodlord.

Charlotte Street Capital, an investor in Goodlord, has quibbled about the strike's opposition to 'fire and rehire'. Employment law tends to be stacked in the capitalists' favour - but the financiers need a refresher on this point.

Legally, failure to renew a fixed-term contract is a dismissal. Reengagement on inferior pay and conditions absolutely is fire and rehire.

Fire and rehire should be banned. As we go to press, just ahead of polling day, where is the backing from London election candidates?

The implications for all London office workers are weighty if attacks like this pass unchallenged. The bosses argue that remote working means their London workers don't need London pay levels. This is a strike the whole London trade union movement needs to get behind.