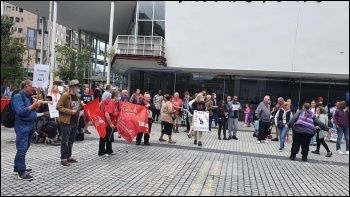 Performing arts union Equity has been fighting to restore professional opportunities and funding alongside youth services. But the council has cut out the union and community at every turn.

The threat of protest got us talks in late June. The council then broke them off and dismissed our demands.

Equity's first protest on 28 August pushed the mayor to reopen discussions. But the hostile attitude to the union was sadly evident again.

Mayor Rokhsana Fiaz unilaterally excluded one of Equity's delegation - a parent representing a learning-disabled Equity member whose theatre company was displaced by the eviction. There was little engagement with the union's core proposals.

But the council did commit to a schedule for further discussions - on issues including funding and rehoming displaced groups. It broke this promise.

The deadline for bids to run the new centre is 18 October. Equity had no choice but to call a second protest for Saturday 16 October.

In the context of our campaign, the council has put in writing more explicit commitments to "attracting and facilitating professional performances and other cultural activity in the building." However, it is still offering unrealistic funding.

Far from replacing the national grant, Newham Council is only offering £270,000 - and really this is just for youth services. The council is asking bidders to supply a further £190,000.

Equity still maintains that a total budget of £1 million - including subsidy and sales revenue - is what the centre needs. But as a minimum, we demand the council commit to funding the full £460,000 value of the current contract, and reviewing with a view to increase in future.

Newham Council has £616 million in usable reserves. It should draw on these to end austerity now, and lead a campaign to win more funding from central government.

And it must stop ignoring Equity's proposal for a democratic conference of the local arts organisations, unions and working-class community to set Newham's cultural agenda.