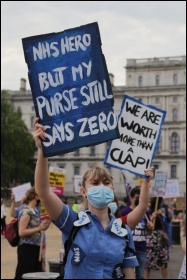 Rising energy prices will mean this winter many people will once again face the stark choice between 'heating and eating'.

It's all part of Boris Johnson's so-called 'high-wage economy'. What garbage! Workers have suffered years of real cuts in living standards. In-work poverty has rocketed, as has job insecurity and casual working.

The Tories say they are ending a "one year pay pause" in the public sector, but in reality there has been a decade of real-terms pay cuts. We don't yet know what pay rises may be offered for next year; but workers will only get back any of what they lost over ten years through trade union struggle.

Even then, the Tories don't want to fund any pay increases - so, without a battle, it will mean further cuts in public services.

The hypocrisy of announcing some money for new family centres, when their cuts have previously resulted in the closure of hundreds of Sure Start centres, is breathtaking! New money has supposedly been found for the NHS and social care by raising National Insurance - hitting mainly lower paid workers. Yet it will do very little to end the massive NHS waiting lists or solve the crisis in social care.

But Keir Starmer's Labour has no answers. He retreated from the idea of a £15-an-hour minimum wage, proposing only £10. Now the Tories have already virtually matched it at £9.50!

We don't have a high-wage economy; we have a high-wealth economy for the super-rich minority. Britain's 171 resident billionaires increased their vast wealth last year by 22%. It went up to £600 billion between them, at a time when millions were suffering cuts to their living standards.