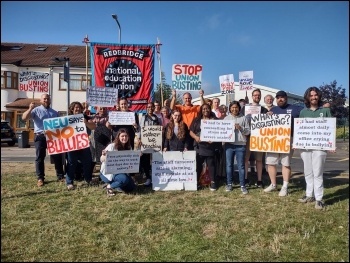 The Oaks Park picket line in Redbridge, east London, on 15 September was as angry and determined as the day it began, when school workers said 'enough' to bullying management and the unjust letting go of National Education Union (NEU) rep Keiran Mahon. As before, McDonald's and homemade cookies were bought to fuel the strikers, while school rep Bill Stockwell played morale-building tunes on his cornet.

To the school workers' delight, two past students attended the picket, stating that they had found the movement on social media and wanted to find out more after being told that the allegations and strike were not real. The news that the union had announced eleven more days of strike action, starting on 29 September, only served to add to the mood of the pickets before going to lobby their local MP.

When strikers went to the office of Blairite Labour MP Wes Streeting - who has so far refused to back the union - the office was locked, with the blinds down. School workers, who just wanted to speak to Streeting and his staff, peeked under the blinds and saw they were in, but hiding!

So far, the strikers have also been talking to parents and organising meetings to build a strong force against school management, which has proven to be a useful auxiliary tactic in the school strikes. This as was also shown with the Avenue Primary School strikes in Newham, when parents supported picket lines and even occupied the office.

While parents storming the school reception is not promised to happen every time, it shows the power of school workers, parents, and the union united. The strikers also took their campaign to the council chamber, asking questions and unfurling banners.

The strikers heard a message of support read out from Socialist Party member and NEU deputy general secretary candidate Martin Powell-Davies. While recognising the incredible significance of supporting local districts and schools like the Oaks Park strike, he also campaigns for the union to be prepared to build for strike action nationally.