As profits for Tory toffs steadily climb, low-income working families will be left £2,543 worse off by 2020. Lift the benefit cap!

Iain Duncan Smith's resignation from the Department for Work and Pensions opened up another malevolent attack on pensioners.

Tory work and pensions secretary Iain Duncan Smith has appointed Doug Gurr, president of Amazon China, to his department's board of directors.

What better way to communicate with adults about pensions than with a multi-million-pound computer-generated soft toy?

2,380 dead after Tory attacks on disabled: The full horror of Iain Duncan Smith's bullying of the sick and disabled off benefits is now clear. We say: scrap 'work capability assessments' and reverse welfare cuts!

When Iain Duncan Smith cheers the budget speech, we know it's bad news for working class people. Their headline promise of a new 'living wage' is no such thing.

The Tories are determined to bulldoze through welfare cuts of £12 billion, alongside billions of cuts in services 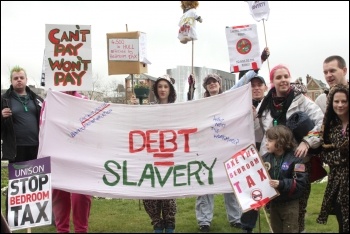 Scrap the Bedroom Tax NOW: Tory welfare-slashing minister Iain Duncan Smith should resign. The millionaire architect of the hated 'bedroom tax', has illegally imposed the tax on tenants not liable to pay it

Modern-day Scrooges in a Tory council

It seems that Charles Dickens' fictional heartless boss, Ebenezer Scrooge, has been surpassed by the ruling Tory group on Hammersmith and Fulham council