The largest branch of transport union RMT - London Underground Engineering, this year named the Bob Crow branch to commemorate the fifth anniversary of the death of the union's towering general secretary - hosted the launch of the latest edition of Reclaim the Game

Short reports of trade union struggles including strikes by government workers and train cleaners in London.

Devastating 62% cuts in Leicester: In Leicester, spending on all council services, excluding social care, has been slashed by no less than 62% in ten years. This has had a devastating effect.

Campaigners and trade unionists came together to march through Leeds city centre and say that, despite the government's chronic paralysis over Brexit, the Tory plans to destroy our health service are still ongoing.

The Socialist Party stands for workers. Unlike the capitalist political parties, we don't take any big corporate donations, meaning that we aren't financially accountable to the bosses and they can't control us.

Leicester Socialist Party member Tom Barker put the case for a socialist Brexit at an EU debate, organised by Leicester Young Labour, on 21 March. Blairite MP Liz Kendall and MEP Rory Palmer were due to speak, but unfortunately both backed out at the last minute.

Letters to the Socialist's editors including racism in football, cuts in Liverpool and imperialism at Oxford uni.

Pro-capitalist politicians are united in wanting to keep Corbyn out. They are afraid of the millions of working-class people who could be mobilised if they see the opportunity to fight for socialist change.

Unite the Union has blasted Greenwich council for the continuing uncertainty being suffered by over 700 staff at GSPlus/GSS - the company set up by the council to compete for contracts.

Cancer-causing chemicals and other potentially harmful toxins have been found close to Grenfell Tower in fire debris and soil samples, according to the University of Central Lancashire.

Haven't the Tories and Blairites got enough to answer for without barring poor children from playgrounds? An investigation by the Guardian has showed yet another side of life under the 'Nasty Party' and its shadows on the right of Labour.

By cutting, Labour councils deliver a double whammy for the Tories, who get what they want and get Labour to share the blame too

Theresa May's 'Brexishambles' keeps rolling on. And we're sick of it!

It's one world for the super-rich, and enotehr for the rest of us. Socialism worries, bills, uni art splurge, agency austerity

National Education Union: The 2019 conference will provide opportunities for action on pay, and discussions on workload, testing, curriculum and more

After decades of silence, world governments have woken up to the brutal repression against China's ten million Uighur Muslims

For about an hour, the audience bombarded the Trust's representative with story after emotional story about the devastating effects of NHS cuts

Divine Rescue, a homelessness charity, is being evicted from its council-owned premises on the Aylesbury estate in Southwark

"An Uber driver has to work 35 hours a week just to break even... Then to make any money you just keep racking up the hours"

TV review: At the end of World War Two, US imperialism calculated the British Empire was a spent force and the US could take on the mantle of world power

Corbyn must demand election, defend workers' interests and fight for a socialist Brexit

It is clear that, in the event of a Jeremy Corbyn government, the workers' movement will have to pressure the front bench to stick to its manifesto commitments

The workers lack sufficient 'personal protective equipment' - for months they have sustained serious injuries, and found no support from bosses

On 2 May council elections are taking place in England, along with six directly elected mayors. The Socialist Party is contesting around 40 seats across the country, as well as the mayoral election in Leicester.

October's UN Intergovernmental Panel on Climate Change report said there is only 12 years for global warming to be kept to a maximum of 1.5C to avoid devastating effects.

1.3mn ballot papers are going out to members of Unison to elect their national leadership.

Letters to the Socialist including National Action, socialists miners and the army. 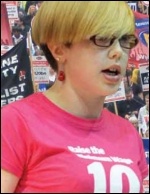 £400 billion worth of land - about 10% of the land mass - has been privatised since 1979, making it the biggest single privatisation, according to economist Brett Christophers.

School workers' anger has been expressed at the 2019 conference of the National Education Union (NEU).

Sudan - No to the rule of the generals! 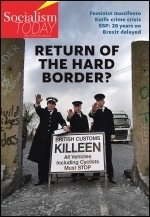 Editorial of the Socialist, issue 1039: Capitalism is a blind, unplanned system where the only driving force is the need to maximise profits. The change that is needed is socialist.