IF YOU want to show a film at a Socialist Party or trade union meeting that inspires people to struggle against the bosses' system then you should get a copy of the DVD about the action by the Turkish migrant workers employed by Turkish multinational Gama in Ireland last year...

LINCOLNSHIRE FBU has been campaigning recently against proposed cuts in local services. They have taken to the streets to protest at the way the cuts are being brought in through the back door following alleged consultation, writes Marc Glasscoe.

STRIKE ACTION by PCS members in the Department for Work and Pensions (DWP) has brought management to the negotiating table and forced them to make an offer to settle the dispute, writes Jane Aitchison, PCS DWP president, personal capacity.

Sinking under a debt mountain

"ANOTHER DAY older and deeper in debt" goes the lyric of the 16 Tons song. Unfortunately, this is an all too accurate description of personal indebtedness in Britain today...

Tommy Sheridan's victory over News of the World

TOMMY SHERIDAN has won his libel action against the News of the World (NoW) and Rupert Murdoch's media empire. It is a victory not only for Tommy Sheridan, but for socialists and the left internationally over one of the most most reactionary, anti-working class news organisations in the world, writes Sinead Daley, SSP executive member and CWI.

ISR takes to the streets! Reports from swansea, Bristol, Huddersfield and Leeds.
Swansea ISR members held a protest on 22 July against the brutal Israeli bombardment of Lebanon. In just over an hour we managed to speak to over 50 young people by going round where they hang out with the petition and leaflets.

Fighting to defend the health service

THE GOVERNMENT is hell-bent on slashing the National Health Service to the bone. Its attempt to protect the profits of its big-business friends means that the NHS must suffer. And it will be working class people who will suffer...

Police given licence to terrorise

NO POLICE officer will face charges for the shooting of Mohammed Abdul Kahar in an 'anti-terrorist' dawn raid at Kahar's home in Forest Gate, east London, on 2 June...

Huge protest against the invasion of Lebanon

UP TO 100,000 lively, angry protesters marched through central London on 5 August to demand an immediate ceasefire in Lebanon and to show their disgust at the Blair government’s continuing support for US and Israeli policies in the Middle East...

FOR GEORGE Bush and Tony Blair, the architects of 'regime change' in Iraq, their swift victory over Saddam Hussein in 2003 must seem like another era as the country descends into sectarian conflict and chaos...

THE RECENT horrors in Lebanon and the ongoing quagmire for the occupying forces in Iraq have pushed the war in Afghanistan out of the main news headlines, writes Steve Score.

Israel out of Lebanon now!

AS ISRAELI missiles continued to bombard Lebanon, an immediate ceasefire was demanded by an emergency demonstration of 100,000 people in London on 5 August, writes Jenny Brooks.

MEMBERS OF the Communication Workers' Union (CWU) held a protest outside the Swansea branch of WH Smith last week to highlight the threat to jobs and services if the city centre Crown Post Office is closed and franchised out...

PRISON OFFICERS have voted to take industrial action, up to and including a strike. 71% voted for action in an 83% turnout in the ballot...

Visteon workers fight for their future

WORKERS IN Ford's parts business Visteon are facing rumours that the company is looking to sell. Union representatives met the European management in Germany last week to get an update on the sale of the chassis division, writes a Visteon worker.

Cream for fat cats - debts for us!

"YOU CAN'T trust the Liberals", an angry council tenant said on leaving the 26 July meeting of Lewisham council. Socialist Party councillors Ian Page and Chris Flood had moved a resolution calling for tenants to be balloted, writes Clive Heemskerk.

Lincoln Socialist Party held a public meeting on 16 August to build a coalition against the rise of the BNP and far right in our area. Over 30 people, including trade unionists, campaign organisations and local activists supported the initiative to launch Lincoln against Racism and Fascism.

Preparing for the new term

SOCIALIST STUDENTS is planning its campaigning activity in colleges and universities across the country for the next term, writes Matt Dobson Socialist Students national co-ordinator.

...so let's give him one at schools and colleges around the country!
Many young people see Tony Blair as a poodle to the foreign policy of warmonger George Bush...

The NHS: What we say

*No to NHS job losses, cuts and closures.
*No to NHS privatisation and 'the market'...

Cuts and sell-offs in Birmingham

AT BIRMINGHAM Socialist Party's city centre stall on 19 August some health workers including trainee doctors and nurses, told us they don't have jobs at the end of their training...

Ballots and lobbies in Pontefract

OVER 300 people demonstrated against proposed hospital cuts in Nuneaton on 17 August. The Acute Services Review wants to transfer some emergency care along with children's and maternity services from Nuneaton to the new PFI hospital in Coventry.

CHANNEL FOUR'S Dispatches programme on 14 August gave a detailed exposé on the costs of PFI to the public services...

THE GOVERNMENT has announced that a new £1.5 billion wave of new hospitals will be built under the costly but profitable (to private firms!) Private Finance Initiative (PFI)...

LOW-PAID ancillary workers were on the picket line outside Whipps Cross hospital in east London on 14 and 15 August. "We are determined to get a just settlement of our claim", joint UNISON branch secretary Len Hockey told the socialist.

THE LATEST alleged terror plot in the UK has brought memories of 7/7 flooding back, when more than fifty people were killed while travelling to work in London, writes Hannah Sell, Socialist Party deputy general secretary.

Unite against war, terror and racism 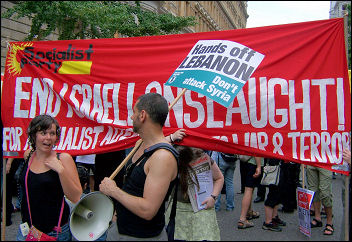 ISR on demonstration against Israel's war on Lebanon

THE ISRAELI ceasefire was met with great relief in Lebanon. During 34 days of intensive shelling, over 9,500 Lebanese 'targets' had been hit by the Israeli army and navy, writes Jenny Brooks.