Around 60 supporters attended the lobby to Defend the Four outside the Unison HQ in London on 30th July. See Unison witch-hunt: Defend the Unison Four! for details...

I wish to express my solidarity with your occupation and campaign to save Vestas. The disgusting attempts of Vestas to force you out through starvation, intimidation and injunctions demonstrate that you...

Save our Vestas! Nationalise now! 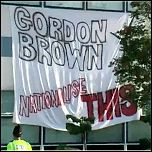 Socialist Party Bulletin Number Three: Well into the second week of the occupation, the Vestas workers are standing firm. The march through town last Saturday and daily protests at 6pm outside the factory gate show the wide support for the occupation. (4 August 2009)

WIDESPREAD ANGER greeted the news that the far-right, racist, BNP won two seats in the recent European parliament elections, not least from those in society who are scapegoated by the BNP's poisonous ideas... 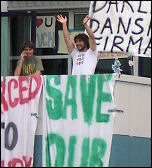 No Victimisation! After eighteen days in occupation, the first stage of the campaign against job losses at Vestas Newport has come to a close but workers have made it clear that the fight goes on...

THE British National Party's (BNP) leaders and organisers have not changed their neo-Nazi ideas. They are committed to stirring up racism and division at every opportunity.


Protest against the BNP's 'festival of hate'

Protest and mass picket from 9am at Codnor market place, Codnor, Derbyshire 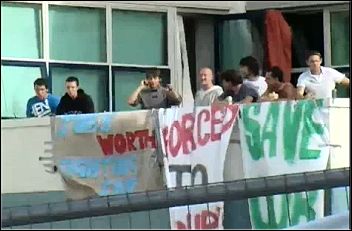 Editorial: The courageous workers' occupation at the Vestas wind turbine plant in Newport on the Isle of Wight has been followed and supported by many in the trade union movement over the last few weeks... 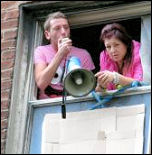 Eyewitness account A FIVE-DAY occupation by workers at the Thomas Cook shop in Grafton Street, Dublin, over redundancies, was brutally ended by Garda (police) in a dawn raid.

Socialist Party (Ireland) councillor Matt Waine was arrested along with 28 workers in the early hours of Tuesday morning 4 August and locked up at Bridewell Garda station. Here is his eyewitness account. 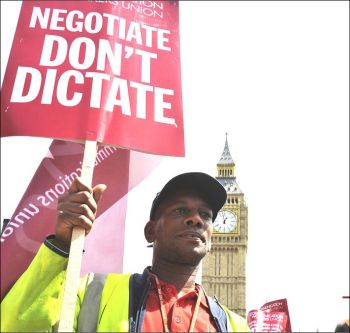 All-out action: Postal workers, members of the Communication Workers Union (CWU), have been on a series of strikes over the summer against bullying management and their attempts to impose worsening conditions in an obvious preparation for privatisation.

Our reports show that these strikes have been well-supported and angry postal workers have been demanding that the battle be intensified with national, coordinated action... 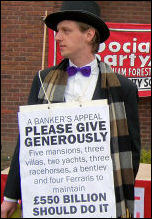 Less than a year after bringing the global economy to its knees, shameless city bankers are to receive a staggering £4 billion in bonuses. These vultures, who had pledged to end the bonus culture, are now lining up for massive pay-outs,
writes Elaine Brunskill.

THE EVENTS of August 1969 were an historical turning point for Northern Ireland that echo down to this day. The first deaths of 'the troubles' occurred in 1969.

Ciaran Mulholland of the Socialist Party in Northern Ireland explains how the situation rapidly escalated to the brink of civil war and what lessons can be learnt from these events. 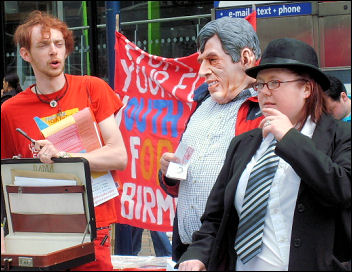 From Thursday 20 August, when the A-level results are released, hundreds of thousands of young people will be hoping to get onto the course and into the university they have chosen, writes Matt Dobson, Socialist Students national organiser.

Comment: On top of their fat pay packets and bloated expenses, MPs may have found a further way to save money, writes Edd Mustill, Cambridge Socialist Students.

Yet more proof that the market system offers no future to young people. According to the BBC a senior government education advisor has found that one in six of the teenagers who are out of work and education...

No to racism and fascism: THE BNP has lost its seat in Brinsley, their only seat on Broxtowe Borough Council, Nottinghamshire.

THE ENGLISH Defence League, a split off from the BNP, and the linked 'Casuals United', said that they would march to the Bullring in Birmingham on Saturday 5 August, ostensibly to protest against "Islamic fundamentalism", a Birmingham Socialist Party member writes.

FACED WITH a mounting death toll of civilians and military forces and Nato's failure to build a democratic state, the incoming head of the British Army says that British troops may have to stay in Afghanistan for 40 years...

Barely 100 days into Jacob Zuma's presidency, the class contradictions that have produced political polarisation and then a split in the African National Congress (ANC), have sharpened with a vengeance, writes Weizmann Hamilton, CWI South Africa.

After the fantastic support given to the Save Our Steel march at Redcar on 18 July, thoughts turned towards developing the solidarity of the steelworkers into a national campaign, writes A Corus worker.

On 11 August, street cleaners and refuse collectors employed by Enterprise-Liverpool are striking over pensions and bonus pay...

Surrey council must buy back these homes now!

The above headline was the unanimous message from the 40 plus people who attended a public meeting on 5 August...

On 11 August a strike ballot of engineering construction workers will begin. It will include workers on sites in Grangemouth, Sellafield, Stanlow, Staythorpe, and Aberthaw, all members of Unite and GMB.

Aslef members at East Midlands Trains are balloting on the latest company pay offer after ten hours of negotiations led to an offer which the union thinks is an improvement, writes An Aslef member.

DESPITE MOUNTING evidence that Britain's spy agencies colluded with foreign governments in the torture of terrorist suspects, the Labour government and MI5 continue to deny any involvement...

Protests flood in against Unison witch-hunt 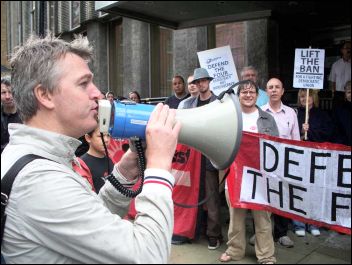 Socialists in the UK and the USA speak out

Spanning more than 80 years, from the 1840s to the 1920s, Edward Carpenter was involved in the rise of mass industrial trade unions, working-class political representation and the struggle for women's equality. Manny Thain reviews Edward Carpenter: a life of liberty and love, by Sheila Rowbotham.

AROUND 1,500 marchers turned out to protest against the far-right racist BNP's "festival" in Derbyshire on 15 August. They made it clear that the BNP have no solutions to the problems faced by working people, writes Naomi Byron.

Marxism and the Second World War

Peter Taaffe writes in the latest Socialism Today, magazine of the Socialist Party.

The real lessons of the Second World War

Seventy years ago, the major powers plunged humanity into the horror of world war, Peter Taaffe writes in the latest Socialism Today, magazine of the Socialist Party.

Leeds: After a series of campaign stalls in the city centre, Leeds Youth Fight for Jobs (YFJ) organised a protest outside Eastgate Jobcentre on the day the latest unemployment figures were announced, writes Manny Dominguez, Danny Melia and Helen Pattison Leeds YFJ members.

Leaving education - freedom! No more homework! Making your own way in the world! Independence! Get a job. Oh no, wait, I forgot about the biggest financial disaster since the 1930s. Suddenly, leaving education...

THE GOVERNMENT'S tax income from private companies and individuals has slumped due to the recession. Tumbling profits have pushed the government's business tax income down 38% while unemployment has increased...

Time to Fight Back: demonstrate at TUC conference

WORKERS WANT a way to defend jobs, rights and wages against the bosses and the recession. Socialists want to make sure that workers' voices are clearly heard outside this year's TUC Congress in Liverpool, which brings together delegates from across the trade union movement from 14 to 17 September.

No to health privatisation and 'the market'

What we think: Britain's NHS has become a pawn in the offensive by US Republicans and the big insurance and healthcare companies against Barack Obama's proposals to reform the US healthcare system.

As the right-wing hysteria has mounted, 'Obamacare' has been described as both 'socialist' and 'Nazi'.

There is a justifiable anger against the odious slurs cast on the NHS by the US health insurance companies and reactionaries of every stripe as they strive to undermine President Obama's health care plans, writes Roy Farrar.

"WHAT DO we want? Nationalisation", "Vestas Out, Workers in!", were the chants of Vestas workers and their supporters as we took to the streets of Sandown, Isle of Wight, on 22 August getting great support from locals and holiday-makers. 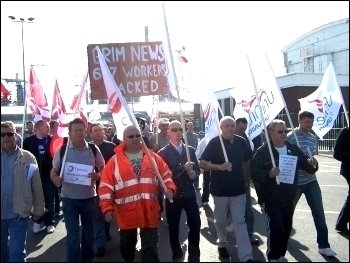 Stockport and Merseyside: Postal workers, members of the Communication Workers Union, have been on strike this month in most parts of the country, writes Hugh Caffrey.

No to Future Jobs Fraud scheme 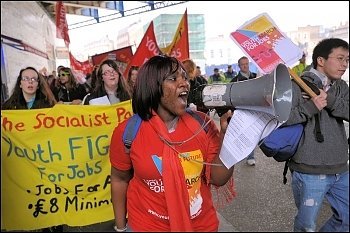 Youth unemployment: The situation for young people looking for work in this recession is still desperate and it is getting worse, writes Sean Figg, Youth Fight for Jobs national organiser.

Former president of the US Federal Reserve, Alan Greenspan has described the economic situation we are living through today as a: "once in a century economic crisis", writes Aron Amm, CWI Germany.

MEGAN PRICE, 22, is standing as the Socialist Party's candidate in a district council by-election in Daventry, Northamptonshire, where she lives, writes Tom Price, Northants Socialist Party.

Unison witch-hunt/employment tribunal: The truth is coming out 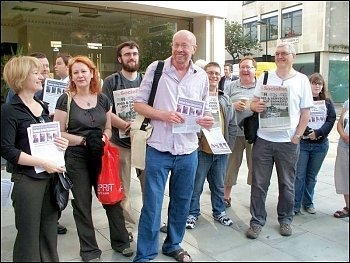 As we reported in the last issue, four Socialist Party members have been banned from holding office in Unison for three to five years by a Unison disciplinary committee.
This follows the production of a leaflet at the 2007 Unison conference which was said to cause "racist offence" because it displayed the well-known cartoon of the 'three wise monkeys'.

South Yorkshire firefighters could soon be taking strike action for the first time since the national dispute in 2002, writes Alistair Tice.

How safe are our houses? 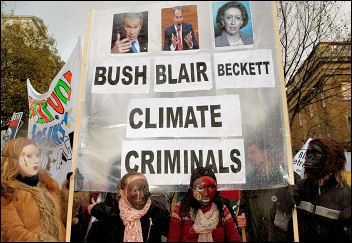 "The Black Saturday fires created winds of 120km/h that snapped trees in half. The fires created their own weather, triggering storm clouds and lightning strikes that started more fires. They created...

Bus passengers will not have been surprised by a recent report from the Office of Fair Trading (OFT) accusing bus companies of milking public subsidies and taking advantage of the free bus passes enjoyed by the over 60s and people with disabilities, writes Calvin Payne, Sheffield.

The August presidential elections in Afghanistan will bring no relief to the Afghan people. A similar government to the previous one is the expected outcome, with even less room to make meagre concessions...

Jobs and education not dole and debt 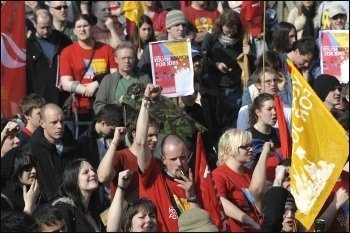 Join the demonstration on 28 November in London
* Fight for real jobs
* Fight for free education
How many obstacles can the government put in front of young people who want a decent future? The brutal testing regime of the British education system and the bleak prospect of £23,000 worth of graduate debt have not satisfied Gordon Brown and Co, Danny Melia and Sarah Sachs-Eldridge write.

Fighting for LGBT rights in the USA

FRUSTRATED BY the inaction of the Obama administration and unwilling to continue to accept their second-class status, gay rights activists have called a national march for equality in Washington, DC, on 11 October...