No pay rise for ten years! That's why 18 steel fabricators in Sheffield are on strike

Over 200 people came to the launch meeting of the #Justice4Daz campaign last week, which was set up after Coventry man Darren Cumberbatch died after "contact" with the police

Fight for mental health funding: Nearly half of England's mental health units are out of date or unsafe according to healthcare regulator CQC. Thousands were "inadequate" or marked "requires improvement."

Since the NHS began outsourcing care services to private companies and charities, wages and conditions for carers, support workers and healthcare assistants have been squeezed.

35 concerned patients, ex-patients and staff attended a passionate public meeting called by the Socialist Party on 3 August to discuss plans to fight the closure of the Chatsworth rehabilitation ward at Mansfield Community Hospital

Colin John, a new member and retired trade union convenor, turns up regularly on our Saturday campaign stall in Swansea despite his mobility problems

What's summer about? Sun, sea and... strike action! Fat cats and their Tory MP mates might be lounging on private beaches, but a strike wave is going to hit them

Join the Young Socialists!: Unemployment and underemployment in Hull, particularly for young people, is unacceptably high

The stress and hardship faced by nurses

NHS England currently has 89,000 staff vacancies, 40,000 of which are nursing posts. After 27 years as a nurse I can see a 'perfect storm' of political decisions that are forcing so many nurses away from

Doncaster bin workers employed by contractor Suez, were set to begin a strike

Coordinate strikes to defeat the Tories

Normally a quiet month for the trade union movement, August has seen a whole number of industrial disputes raging on

Socialism 2017 takes place on 11 and 12 November. It is a weekend of discussion and debate with a choice of over 40 workshops and rallies

Fight for safe homes for all: Hundreds of tower block residents have been decanted by Southwark Council in south London over serious safety concerns the Labour administration initially dismissed

There was unanimous agreement that the victory of Corbyn raises the possibility of RMT once again affiliating to Labour, but the discussion also recognised the structures of Labour remain in the hands of the right

On their 74th day of strike action, British Airways mixed-fleet cabin crew and their supporters, circled Heathrow Airport in an open-top bus

McDonald's workers balloted at Crayford, south east London, and Cambridge stores have voted by an incredible 95.7% in favour of strike action

40 years ago almost to the day before Charlottesville, on 13 August 1977, the fascist National Front aimed to march through Lewisham

Even with a national mobilisation, the National Front could only muster around 30 supporters

With only a day's notice, around 100 people gathered outside the US embassy in London on 15 August to stand in solidarity with Charlottesville anti-fascist demonstrators

Fight for a socialist Brexit: The single market compels privatisation of public services, prohibits nationalisation, and makes it easier for employers to exploit workers in numerous ways

On 14 August members of Save North Tyneside NHS active in Labour, Unite the Union and the Socialist Party met with North Tyneside MP and shadow cabinet member Mary Glindon to discuss cuts

Review - 1919: Britain's year of revolution: Like countries across Europe, Britain was not immune to the impact of the 1917 Russian revolution

The real answer to tackling abuse is not racial profiling. It starts with fully funding essential services

"Talk about sourcing that will save the plant or we'll fight", say Bridgend Ford workers to the company

Liveaboard boaters being forced off the waterways

Support workers at Bron Afon Community Housing in Cwmbran, south Wales, have begun their second five-day strike in as many weeks

Uup to 140,000 people poured onto Hong Kong's streets in the biggest anti-government protest since the 2014 'umbrella movement'

"We will not stop until we have ripped this decision apart!" Chatsworth ward in Mansfield is a vital facility for some of the most vulnerable members of our society - this is where we as staff members come in!

Rather than allowing the press to whip up division between pedestrians, cyclists and drivers, we should be united in demanding urgent transport investment

UK education spending is behind many eastern European countries, according to EU figures

By implementing spending cuts on an unprecedented scale in Scotland, the SNP leadership has begun to be exposed 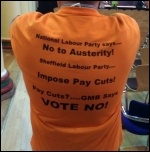