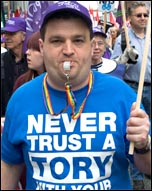 Chancellor Osborne has had to admit the humiliating truth - his policies to revive the British economy aren't working.

Hot air from Starbucks...: The ever-generous Starbucks has agreed to carry out a review of whether it maybe possible, at some point, to pay a little more tax...

NHS in Wales under attack

Mass action needed to save our health service: In England, NHS users face the relentless drive to privatise so that ruthless private bosses can make a fortune with no regard for the service they are supposed to provide, writes Claire Job, Nurse and Socialist Party member.

A 24-hour general strike to defend the NHS: Over 2,000 trade unionists and their families marched in Bristol on Saturday 1 December to protest against the recently formed NHS employer, South West Regional Pay Consortium, writes Dominico Hill.

Campaign to save Lewisham A&E continues 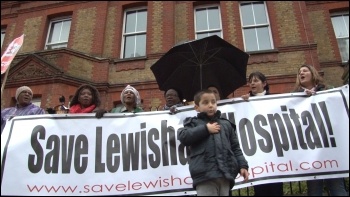 Around 10,000 NHS staff and local people demonstrated on 24 November against the closure of Lewisham hospital's A&E department and other services...

Bristol Socialist Party members were stunned by the untimely death of our comrade Suzanne Coombes on 10 November... 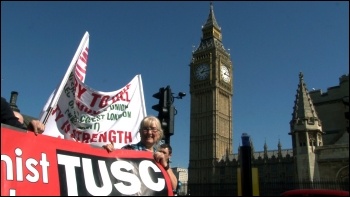 "November was an unusual month. You can wait a long time for a byelection and then six come along in one month... 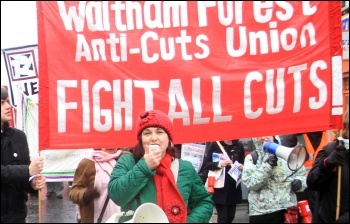 In a slightly shorter version of an article previously published on the Food Bankers' blog, Nancy Taaffe explains her severe misgivings about food banks...

RMT cleaners: 'Prices are going up - but we get nothing extra' 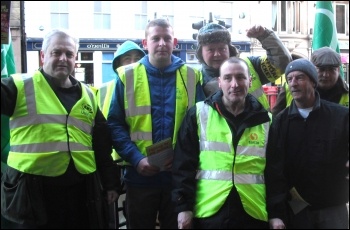 All-out Christmas strike: After taking over 30 days of strike action over the summer, 20+ re-cycling workers, working at Sheffield's five Dump-it sites, thought they had secured an agreement to restore their working hours...

Scottish referendum: What sort of independence should socialists campaign for? 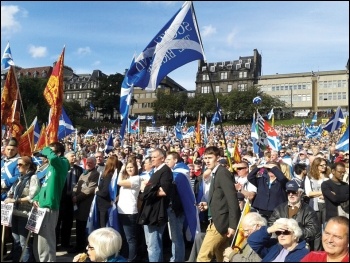 Rallying for a yes vote in Edinburgh as thousands march for an independent Scotland, photo M Dobson

The 2014 referendum is going to take place against the backdrop of an unprecedented economic crisis. Tory Toff, David Cameron's Con-Dem government is attempting, and to a degree has already succeeded,...

Nothing to lose - Tesco drivers vote for indefinite strike 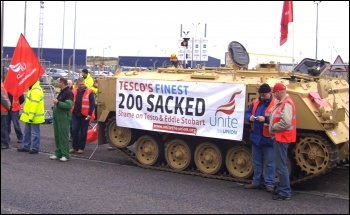 180 Tesco drivers, members of Unite the union, at the supermarket giant's distribution hub in Doncaster have announced an indefinite strike from 7 December 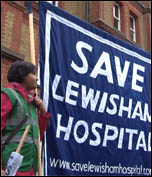 Standing up to austerity on the south coast

Trade Union and anti-cuts activists from across Hampshire came together on 28 November at the invitation of Southampton RMT shipping branch to launch Stand Up on the South, a campaign of direct action and civil disobedience in opposition to the Con-Dems' austerity agenda...

Press release from the Public and Commercial Services Union, PCS:
The union's national executive has agreed plans for a determined campaign for fair pay and working conditions, including a ballot for industrial action by more than a quarter of a million civil and public servants, writes (PCS).

Cultural commemoration on the first anniversary of the notorious massacre in Zhanaozen, Kazakhstan, of unarmed men, women and children by state forces, Sunday 16 December.

The rotten establishment - of a rotten system

Just as arrogant bankers flaunted their wealth while they helped crash the economy, so establishment politicians, press barons and some police have had their arrogance and contempt for 'the plebs' revealed.

Editorial: Don't throw things at the telly - fight back! Working people face attacks on their wages, jobs, services or benefits.

After revelations that the academies programme has run up a £1 billion overspend, which other schools are now being asked to pay for, anger against the government's flagship education policy is growing...

In his Autumn Statement mini-budget, Chancellor George Osborne will attempt populist politics in his budget by scapegoating the unemployed and attacking benefits... 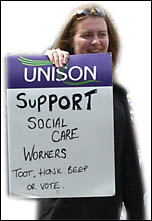 All 200 delegates representing 160,000 Unison members working in local government, health, education etc have unanimously supported a motion from the Glasgow city branch calling for a coordinated industrial action strategy, beginning with a one-day strike across Scotland... 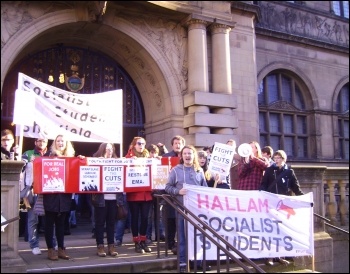 Osborne's autumn statement is yet another attempt to transfer wealth from the 99% to the pockets of the 1% elite... 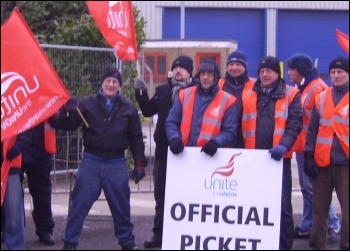 Striking Tesco drivers on the picket line , photo by A Tice

Join the fightback. Fight the 1%. Fight for socialism... 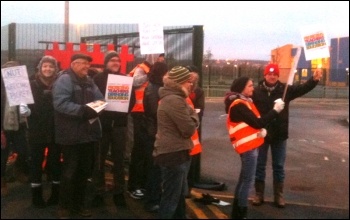 Tamil Solidarity has launched a new campaign in protest at the arrest of students at Jaffna University by the brutal Sri Lanka regime... 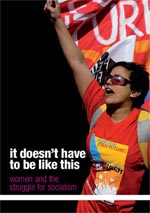 On 5 and 6 January a Socialist Party national women's meeting will take place. In the lead up to this two regions of the Socialist Party report on similar meetings they have organised

On the second attempt, the authorities in Kazakhstan have jailed Vadim Kuramshin, a well-known campaigner for prisoners' rights and member of the Socialist Movement Kazakhstan, for 12 years...

Striking Tesco drivers on the picket line , photo A Tice

With confidence high after Saturday's march and picket, Doncaster Tesco drivers upped the anti on Monday in their dispute with Tesco/Stobarts, writes Alistair Tice. 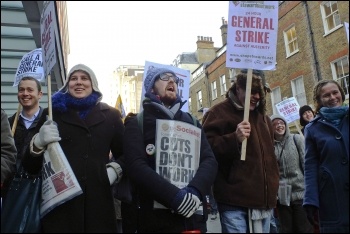 Condemning an anti-LGBTI bill in Uganda

Lesbian, Gay, Bisexual, Trans and Intersex activists, and human rights campaigners, protested outside the Ugandan High Commission in London on 10 December against a repressive bill currently going through the Ugandan parliament

Brixton byelection, south London: We want a candidate we can count on

It may be cold outside but not as cold as George Osborne's heart and his brutal austerity measures. But he's not the only one...

Over 30 members of the National Union of Teachers (NUT) took strike action on 6 December at Westfield Sports College, a secondary school in Sheffield, writes Alistair Tice.

Dressed in Santa hats and with spirits high, around 40 postal workers and their supporters joined the picket line on 10 December at the Bristol South East delivery office, writes Tom Baldwin. 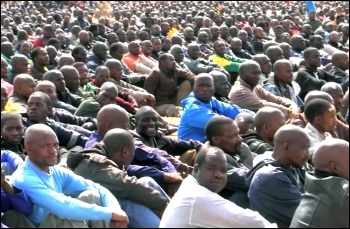 Protests outside Sri Lankan embassies against the brutal suppression of Tamil students in Jaffna, have taken place around the world...

Vadim Kuramshin, campaigner for prisoner rights and member of the Socialist Movement Kazakhstan has been jailed for 12 years...

What a lovely Christmas present we've had from Starbucks this year! The company has generously volunteered to pay £20 million corporation tax over the next two years...

Austerity UK: 'I want to live, not just exist' 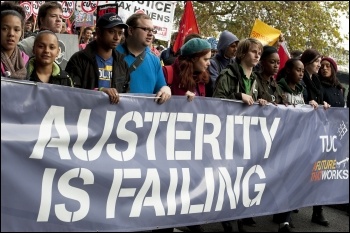 An ambulance worker fighting the proposed closure of his ambulance station told me recently: "I want to live, not just exist." As a single mother, struggling to even 'exist', I understand this sentiment, writes a public sector worker.

Rob Williams, NSSN national chair, replied to an article "The British have no fight in them any more" by Nick Cohen in the 9 December Observer..

A very Them & Us Christmas quiz

How much attention have you paid to the 'Them & Us' column in the Socialist? Try our 20 questions of 2012 to find out. 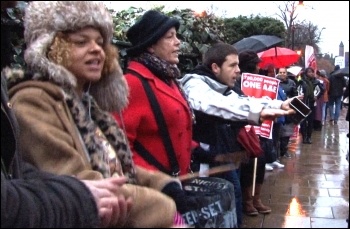 Student nurse says: Give us the resources to provide care!: A recent report flagged up rising death rates and a chronic bed crisis in the NHS. The next day, the national press vilified nurses as uncaring and lacking compassion.

We have many books which would make good presents for your family and friends - both political and less political - and we have selected just a few here.

Blacklisting: 'we will fight for justice in every way'

United Socialists of America: A recent poll by Gallup in the US has shown that 39% of Americans now view socialism positively.

Prepare to resist austerity in 2013 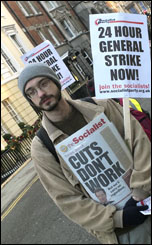 Millionaire Tory Chancellor Osborne began his Autumn Statement speech with excuses for economic predictions reduced from 0.8% 'growth', to -0.1%, a contraction, and lower forecasts for years...

Kick out the cuts coalition

When Tory Chancellor George Osborne presented his Autumn Budget Statement what he served up wasn't so much a speech as a load of lies spun together with well-rehearsed anti-working class hoopla. The Socialist unravels some of the Con-Dems' claims..

Chants could be heard in English, Urdu and Polish as over 200 workers braved the icy weather for a mass picket outside the depot of 2 Sisters Food Group in Smethwick, Birmingham...

Socialist Party members will be saddened to hear about the death of Robbie Segal on Thursday 13 December...

Last Tuesday saw trade unions at Coventry City Council hold a protest lobby of the Cabinet meeting. Around 80 workers attended in their lunch break, with support coming from others unions such as CWU,... 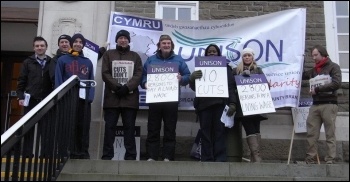 One year after the Zhanaozen massacre, memorials and protests have taken place in a number of countries

Comet owners walk away with £ millions

Over Christmas and New Year 2008/2009, Woolworths, the long-established high street retail chain, folded - a victim of the capitalist economic recession...

Ricky Tomlinson's announcement that the Justice for the Shrewsbury Pickets Campaign has launched a petition to secure the release of state documents, deserves maximum support... 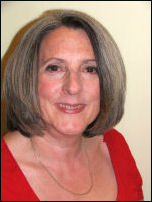 Robbie, a longstanding comrade in the Socialist Party and a leading activist in Usdaw, was at the forefront of workers' battles 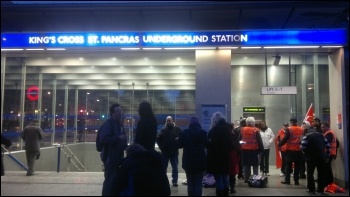