Home care crisis: A new report by former care minister Paul Burstow has slammed the home care system in England as putting people at risk because of underfunding and the exploitation of care workers

A walkout at Lambeth College is due to take place on 4 December following an 83% 'yes' vote for restarting action. UCU members are in dispute over new contracts

Reports from the NSSN bulletin 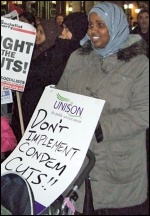 Tower Hamlets hit the news when Local Government Secretary Eric Pickles threatened to send in government commissioners. How can councils fight the cuts and is the use of commissioners a threat to councils who do fight? 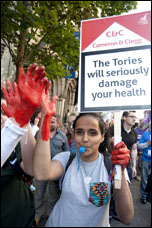 The bitter pill of cuts 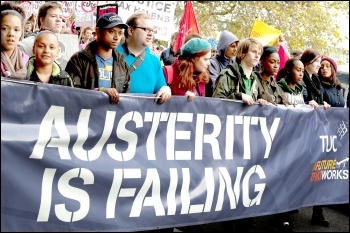 With angry voters to face, Tory hopes that Chancellor George Osborne could deliver significant budget tax cuts as pre-election sweeteners are off the menu

2014 started with a strike on London Underground's Northern line, part of a system wide strike against ticket office closures, and it's ending with another strike on 1 December 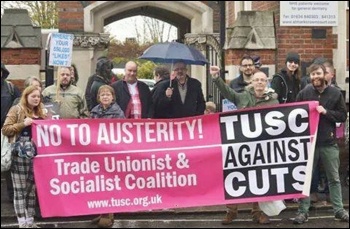 The Socialist Party is launching an appeal for £50,000 to help fund our candidates in the 2015 elections

A local community in Newcastle came out to defend a disabled resident threatened with eviction on 27 November. His rent arrears had been under control - until compounded by the bedroom tax

During Tory Justice Minister Chris Grayling's flying visit to Greenhead College in Huddersfield on 14 November, sixth form Law and Politics students put him on the spot on a number of issues

A protest planned outside Sheffield Magistrates Court is now partly a celebration. Cases against pensioners George Arthur and Tony Nuttall, the "freedom riders" arrested at Sheffield railway station, have been dropped

The government's latest attacks on civil liberties, masked as anti-terrorism laws, are not only dangerous for trade unionists, socialists and social justice campaigners; they reinforce the very causes of 'extremist radicalisation' they aim to stop

A day in the life: I worked at a bar in a major airport. It reminded me of my early school days. Collecting a green pass, the badge of responsibility at work, took about three months

Can you help the Socialist Party grow by 100? To paraphrase Marx, many people become so disturbed by the effects of capitalism after reading the news that they give up reading. Groucho that is - not Karl

Unite Press Release: Over 500 EDF energy workers began voting in an industrial action ballot today (Wednesday 3 December) as a row over pay and spurious disciplinary cases deepens, following confirmation of the sacking of a driver who allegedly ate a 'Dairylea Dunker' while driving 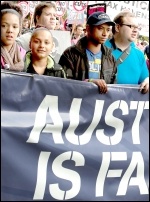 £50 billion cuts still to come: Budget statements are about party politics as much as economics. Especially this one: six months before the general election. But this time there have been few 'election sweeteners', because the government’s own strategy of ‘eliminating the deficit’ is failing

University of Manchester students have been in occupation after a free education march and rally attended by around 100 students, where Socialist Students activist Tom Simpson spoke from the platform, writes By a Socialist Students member at UoM.

Protest/support messages needed: The protest started in Alexandra Square with around 30 people storming the entrance of the University House, the university's admin office, in demand of free education

500 march from Westbrook headquarters to hand in petition

Vote 'yes' to strike for one rate for the job: See www.socialistparty.org.uk/txt/345.pdf

Working class history sacrificed on the altar of austerity

As Russell Brand prepares to take on Farage ...

Defend universal access: Due to a deficit in Devon NHS, some people will be denied surgery unless they quit smoking or lose weight 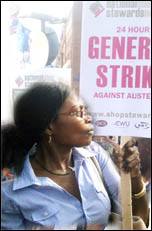 Trade unions must now act to resist Osborne offensive: On Wednesday 3 December the Tories declared all-out war on the working class and all our futures. The Autumn Budget Statement has been described as a “Book of Doom”

The Con-Dem government is tearing itself apart following the chancellor's autumn statement. Osborne promises further savage cuts as his strategy to reduce the deficit lies in tatters

100 year anniversary: "Here we were laughing and chatting to men who, only hours before, we were trying to kill!" These words from an astonished British soldier in World War One (WW1) sum up the incredible story of the 1914 Christmas truce

The "Transfer of Undertakings (Protection of Employment)" or TUPE regulations are European Union regulations which offer limited protections to workers when they are transferred from one employer to another, writes An Aslef member.

Striking teachers at Lambeth College were backed up by some of their students walking out on 9 December, writes Please send messages of support to Mandy Brown, UCU branch secretary, at [email protected]

"I can't breathe": Protests against police racism and violence are continuing across the US

Questions: It's the Socialist big quiz of 2014. As a bit of fun, the editors invite readers to test their knowledge from the past 12 months' coverage in the Socialist of political events and workers' struggles

Housing crisis: Last month, evictions hit record-breaking levels. According to the homelessness charity Shelter, more than 1,300 people are put at risk of repossession or eviction every day

On the same day the Met Office announced that 2014 is likely to be the hottest year on record, Tory Chancellor George Osborne's budget gave tax cuts for the fossil fuel industry

Seasons' greetings: Christmas, we're told, is a time for giving and for families. And it appears to be Christmas all year for MPs' spouses and relatives who were paid a total £3.7 million from the public purse 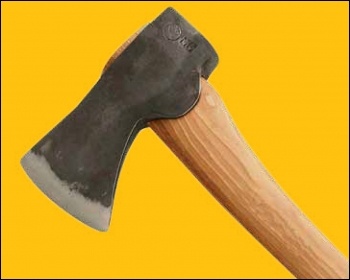 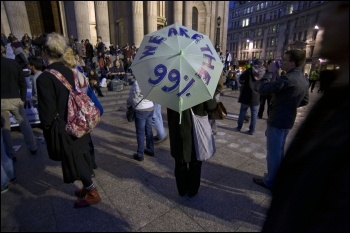 We are the 99%, photo Paul Mattsson

Get ready for 2015 - join the socialists: When a BBC editor referenced George Orwell's Road to Wigan Pier in his analysis of the Con-Dems' Autumn Budget Statement he earned the wrath of Chancellor George Osborne

The US Senate report on the CIA's interrogation of suspected terrorists amounts to a grisly catalogue of torture. It also points the finger of guilt at the UK government's counterparts

London Socialist Party members attended a protest at the Irish embassy in London. 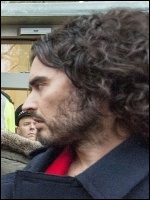 Fight the "pound shop" politicians: The cheers for Russell Brand taking on UKIP leader Nigel Farage were not only in the Question Time audience

'Save Sedgehill': demo against forced academy

Over 400 parents, staff and students took to the streets of Catford

Below is an extract from a message sent by Hackney & Islington Socialist Party to the New Era estate tenants in Hackney, London, on news of their victory over their profiteering, vampire landlord...