An appeal for solidarity with strike action

Fight for an anti-austerity, socialist party - readmit expelled socialists: In recent weeks the strategy of the pro-capitalist Blairites - to surround Jeremy Corbyn and gradually strangle him - has clearly been stepped up

We sold 100 copies of the Socialist on our campaign stall in Hanley in just three hours on 26 November. We were building support for the 4 March 2017 national march to defend our NHS from privatisation.

A new, Uber-style care service has been launched in Britain.

It's one world for the super-rich, and another one for the rest of us featuring banking warnings and Tesco toffs

A three-day strike between 27-29 November shook the regime in Sudan. According to reports from activists and supporters of the CWI in Sudan, universities, schools, market places, public transport and many private businesses, cafes, shops and restaurants were closed.

As terms and conditions throughout the UK are being chipped away, incomes are tightening and security in the workplace is in jeopardy, Unison members voted in September to decide whether or not to strike over the 1.1% pay offer that was made to most members.

On 6 December, Kumaran Bose will be meeting a number of MPs (including shadow ministers) to discuss his recent sacking by Samworth Brothers, a company known for its famous household brands, such as Ginsters and Soreen.

The following letter was sent to councillors by Neil Adams from Reading Trade Unionist and Socialist Coalition (TUSC) to raise questions related to proposed budget cuts to local services.

The all-Labour council in Newham, east London, is threatening to sack up to 1,300 of its workforce.

In January 2014, on the day that Matteo Renzi took office, Contro Corrente wrote that it was the beginning of the end for him

The Tory plan to privatise the NHS via the back door has given way to smashing in via the main entrance. Their next attack is NHS England's shadowy 'STPs'. Under these, the government aims to make a further £22 billion of NHS cuts by 2020

Unite the Union members at UPS Parcels in Camden have won a long-running battle against bullying and racism.

Tata Steel and steel union leaders have announced an agreement. However, it comes with a poisonous sting in the tail.

130 Doncaster waste transfer workers struck on 12 December over a 'draconian' management style and the victimisation and sacking of two colleagues.

Birmingham Labour Party is reported to be excluding members who joined on or after July 2015 from selecting Labour candidates for the 2018 elections.

Homelessness in the UK has reached epidemic proportions. Homelessness in Doncaster is no worse than other towns but a few enterprising folk have set up a tent city to protect the town's homeless.

Following the Leicester Reclaim the Night march, the local Socialist Party invited the University of Leicester Feminist Society to speak at a meeting on rape and sexual violence. The society declined and said some "FemSoc committee and members... felt that the [Socialist Party] were trying to take over women's issues with socialism."

Drugs company Pfizer has been fined a record £84.2 million for excessive and unfair pricing of an anti-epilepsy drug. The choice is simple: cheap, high-quality, nationalised drug manufacturing - or a system that continues to allow corporate raiding of the NHS.

Councils may start seizing the homes of elderly people after death to pay care bills. Ministers are also considering letting local authorities charge more council tax to cover them. Councils should instead fight for more funding, and for care to be nationalised.

In the latest shocking revelations about online retail giant Amazon, accused of "intolerable working conditions," workers were apparently found sleeping in tents near its Glasgow depot.

According to this year's 'veracity' survey from polling agency Ipsos Mori, faith in British politicians to tell the truth is lower than ever before.

It's one wold for the super-rich and another for the rest of us. What might the super-rich pick up as stocking fillers this Christmas? Meanwhile, child homelessness and in-work poverty continue to rise.

55% of poor people now live in working households - for the first time on record.

Teacher trade unionists have been engaged in a bitter struggle to defend education. As socialists, though, we don't simply see our role as a defensive one, but to offer a way out of the chaos: a socialist education programme.

Members of train drivers' unions Aslef and RMT are taking three days of strike action on Southern Rail on 13, 14 and 16 December in the long-running dispute over the removal of guards.

Corbyn's Labour has to push for a working class alternative in the move towards Brexit.

Health workers are bracing themselves for a winter crisis. A tipping point has been reached in recent years. Is it any wonder that around the country a mood of anger and rebellion is rapidly developing?

The attempted scabbing operation by Glasgow Labour council in an effort to undermine Unison's strike action against privatisation of ICT services has been pushed back.

Picket against coal project in Bangladesh 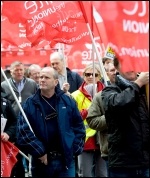 It's clear from the off that Rogue One: A Star Wars Story, a spin-off from the main saga, is a little bit different. The whole scenario is an allegory for American imperialism and intervention in the Middle East, and the insurgency it has created.

The young workers at the Picturehouse cinema in Hackney struck over the launch of the new Star Wars film, 'Rogue One'.

In preparation for the strikes this week, the NSSN has been attacked by the media from the BBC to the Sunday Times and Daily Mail

A prison officer explains the truth surrounding the deal. The guaranteed three year pay deal of 0.5-1% a year is a fallacy: neither the government or the national offender management service have the power to implement this.