The Royal Bank of Scotland wants to cut 259 branches and 1,000 jobs - while the Tories plan to sell it at a £26 billion loss

If you're very wealthy you can buy your way in - but for ordinary people, visa applications don't have many fairy-tale endings

Interviews with socialist women from Mexico, Belgium, Ireland and Brazil

Glynis Breakwell had also claimed £20,000 in expenses, including £2 for a packet of biscuits, leading to chants of "books not biscuits"

TUSC has been prepared to contest local elections against right-wing Labour councillors carrying out Tory cuts - but should that be reviewed for next year's poll?

On 1 December our weekly Socialist paper sale in Coventry managed to pass 1,000 sales since we started in May 2016

Local MP Iain Duncan Smith devised the spiteful system, which has already left families in rent arrears and without benefits at Christmas time

"We have endured the most astounding catalogue of abuse from authorities, but still we fight for justice"

Do you have something to say? Letters to the Socialist editors - tower fire shows need for sprinklers; GPs devastated by cuts; tax dodgers

Socialist Party members continue to play a key role: The conference agreed the need to apply pressure on other unions to meet with each other to coordinate campaigns and action

Abellio has gained a brutal reputation from its stewardship of Scotrail, Merseyrail and Greater Anglia

Editorial of the Socialist: Labour's poll lead is narrow as Corbyn attacks the banks and a national demo is called for May - what now?

A lobby gathered at the Cunard Buildings, Mann Island, ahead of a meeting of Liverpool's Transport Committee

Strike action at Outside Avenue primary school in Newham, east London, against turning the school into an academy continues on 14 December following a mass picket of 80 teachers, parents and children during the previous strike on 29 November

Toys R Us plans to close a third of its stores. Asda wants to downgrade hundreds of shopfloor supervisors. Britain's largest tobacco distributor Palmer & Harvey has gone into administration.

It's one world for the super-rich, and another one for the rest of us including live reindeer and lumps of coal.

A good start was made to the campaign to save council-run children's services in Bradford at a public meeting on 5 December, with representation from service users, trade unionists and community campaigners

Scrap Thatcher's right to buy: Over 40% of ex-council houses sold under Thatcher's 'right to buy' scheme are now part of the private rental sector, according to Inside Housing.

How attentive to the news have readers of the Socialist been in 2017? Here's the test as drawn up by the paper's editors in this year's quiz

A march took place against cuts and privatisation 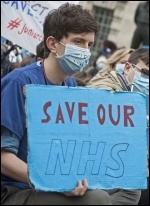 What was the point? That's what the hundreds who attended the council's planning committee will have been thinking

Arriva backed down and offered a two-year deal, accepted by Unite members this week

Avenue School was in near-total shutdown on 14 December, its second strike day in opposition to becoming a quasi-privatised 'academy'