From The Socialist newspaper, 9 September 2010

Against cuts? Come to Socialism 2010

The capitalist leaders at the moment are telling us that cuts are inevitable and there's nothing that workers can do about it. This reminds me very much of when Thatcher brought the poll tax out over twenty years ago.

Then we were told that we can't defeat the poll tax, Thatcher defeated the miners, and ordinary workers can't fight back. But we built a mass movement of 18 million people who wouldn't pay the poll tax and defied the law. We not only defeated the poll tax, we defeated Thatcher who was forced to step down as prime minister.

Cameron has gone down on record as saying that Britain will never be the same again if these cuts go through. He's right in one way: everything that we take for granted is now on the line. Education, healthcare, the welfare state - everything that people before us fought for. However, that's if we don't fight. We believe, in the Socialist Party, that ordinary people have got no option but to fight back and defend all the gains that we have won over the generations. 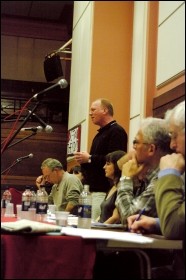 Therefore, Socialism 2010 is absolutely vital for any activists who want to fight back, whether they are in trade unions or in our communities. If you come to Socialism 2010, you can get involved in some of the sessions that are going to discuss how we fight back against the cuts, the lessons of history from campaigns such as the poll tax and the Liverpool Labour city council where mass campaigns defeated the Tories' attacks. But also, if you're a trade union activist that wants your union branch or your union nationally to fight the cuts, then you can discuss this with many other activists who are facing the same problems as part of the same crisis.

So come along to Socialism 2010. I'm sure over the next months and years when you're involved in disputes or community campaigns that are needed to stop these cuts, you'll look back at the time you spent during a weekend in November at Socialism 2010 which gave you some of the ammunition to fight back.

Fight the cuts discussions at Socialism 2010: 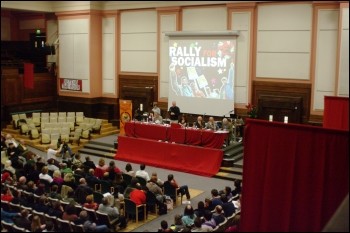 For more information and to buy tickets online go to

We can stop the Con-Dem cuts

We won't be a lost generation!

No to slave labour apprenticeships!

Tony Blair - a journey to Thatcherism

Blair admits he was wrong...

Academies will lead to a two-tier education system

Far right not welcome in Brighton

Fighting for the health service

The callous cutting of NHS Direct

Against cuts? Come to Socialism 2010