From The Socialist newspaper, 3 November 2010 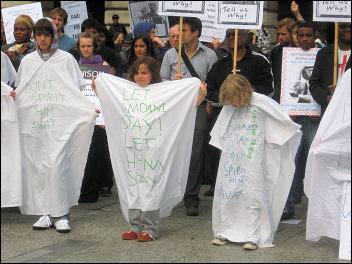 Protesting at the threat to deport AmDani in Nottingham, photo Gary Freeman

Up to 1,000 school support staff gathered recently in Nottingham's market square to protest against Nottingham City council's plans to move them onto term time contracts.

This would mean huge pay cuts. Teaching assistants could lose as much as 25% of their pay. Midday supervisors' pay could fall by up to 8%.

The original plan was for this to start on 1 April without even any pay protection. However such was the uproar amongst staff, teachers and school governors, that even before the protest, the city council had backed off and delayed the implementation.

The city council had clearly hoped that they could get these proposals through without too much opposition. This has backfired spectacularly.

Parent governors were being put in an awful position by the council, being expected to cut the pay of staff who work with their own children! Teachers flooded the local NUT union office with calls and emails.

The first stage of this campaign resulted in the massive protest, one of the biggest trade union protests in the city for years. Dozens of homemade banners including one stating "New contract or new con-act" were on display.

Nottingham City Unison also held a successful public meeting for headteachers and governors to put the case against pay cuts as governing bodies were being asked to vote through these proposals at breakneck speed.

During the campaign many new members and stewards for Unison have been recruited.

The council has delayed but the proposals have not actually been withdrawn. Our campaign will therefore continue until we see off these proposals completely.

Con-Dems' cuts can be stopped

Model motion for a national demonstration in 2010

We need jobs, homes and services - not racism

India - no voice for Kashmiri struggle

Graduate unemployment: We will not be a lost generation!

Cable is a coward!

100 students march against cuts and fees in Leeds

UCU: No education cuts, no fees!