From The Socialist newspaper, 23 November 2010 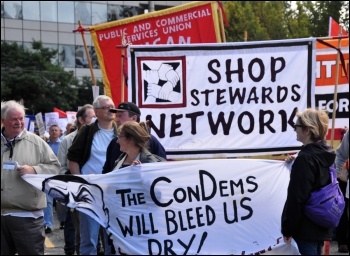 Every time you switch on the TV there is yet more gloomy news about cuts - mostly handed out by millionaires; big business bosses laying off workers to maximise their profit, or their pals in parliament who do their bidding.

But it's not those millionaires who will suffer. Their world is protected one way or another by the depth of their posh wallets. The recently sacked Lord Young actually got it right - for his lot. They have "never had it so good". The richest 1,000 people saw their wealth increase by a third during this "so-called recession". Sales of luxury goods are up this year. Their kids, clever or not, will get to university.

Meanwhile, for the rest of us, everything we have is uncertain. How will we pay the mortgage if our jobs go? How can teenagers stay on at school with no EMA payments? How can they go to university when fees are skyrocketing?

Will we be thrown out of our council flat when our kids grow up? What new punishment and humiliation faces us if we cannot find work when there are no jobs out there?

It feels like everything is at risk of being cut or privatised - or both. And they want us to meekly go to the jobs slaughter. They want us to silently endure the poverty.

Well, the NSSN says No! We are going to fight to stop all cuts. We will not pay for the bosses' greed and their rapacious gambling-house system. We are going to launch a national campaign with a real fighting strategy to win.

That is why we have called an NSSN Anti-Cuts Conference on Saturday 22 January 2011 in London.

We want to welcome hundreds of delegates from:

We invite ALL to come and take part in the debates about how we can stop local councillors wielding the axes the coalition government has handed them. And how we can build a force that will bring confidence to all workers to take up the struggle in their own workplace, college or estate.

These cuts can be stopped.

The NSSN is the union rank and file body founded by the RMT transport union in 2007. It has organised annual national conferences since then involving hundreds of trade unionists. The NSSN is active locally, regionally and nationally, pulling together workers in struggle. We say not one job or one service should be cut. Never has there been a greater need for coordinated action.