Link to this page: https://www.socialistparty.org.uk/articles/10681 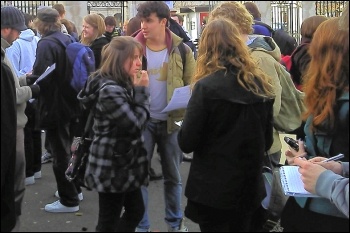 The occupation of Cardiff University ended in victory for the students as the university gave in to two demands of Action Against Cuts - Cardiff.

Not only have occupiers won freedom from victimisation for taking part in the action, implying the university acknowledges the basic right to civil disobedience in protest, but the university's vice chancellor, Dr David Grant, has invited an elected delegation from the occupiers to a meeting, at a time to be arranged, to discuss students' concerns.

Also today, Welsh Assembly education minister Leighton Andrews announced that the Education Maintenance Allowance or EMA, which provides a small but important weekly grant to college students, will be preserved.

Students from half a dozen colleges took part in Wednesday's protest at Cardiff University and additional actions took place around Wales and across the UK.

The Cardiff occupation was one of 22 student-led occupations which started on 24 November; estimates say 130,000 students and academic staff took part in marches, occupations, rallies and other events against cuts in education funding and increases in tuition fees.

Occupiers left at around 7pm on 25 November after two mass rallies outside Cardiff University's main building showed the enormous support for the occupiers.

The 20 students remaining in the building left in triumph, having perservered through a day when they were denied access to drinking water and toilets by the university management. 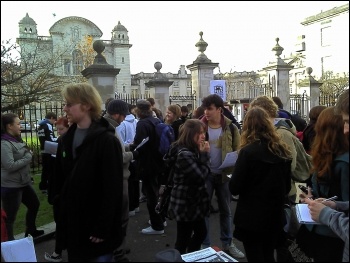 Over 300 students take over the main building of Cardiff university in protest at fees hike, photo Edmund Schluessel   (Click to enlarge)

Intervention by Leanne Wood AM finally shamed the university to concede and allow the occupiers access to basic human needs.

Meanwhile, the University and College Union which represents lecturers and academic staff, and which held a special conference in Manchester today, unanimously passed a motion saying the conference "congratulates and celebrates the magnificent occupations, rallies, marches and other protests by students, school students and staff yesterday.

"They are an inspiration not just to us in the UCU but to the whole of the trade union movement." Lecturers at the conference voted to ballot for strike action against cuts in January 2011.

Edmund Schluessel of Cardiff University Socialist Students noted: "The entire protest was carried out in a peaceful fashion, which even South Wales Police condeded 'passed without incident'.

"This allowed the action to build a broad base of support, bringing in a stream of messages of solidarity from other universities, trade unions, and political organisations.

"Whatever comes next, and have no doubt there is a 'next', will be even bolder. Students across the UK say, no to fees, no to cuts, yes to good-quality education for all!"