Link to this page: https://www.socialistparty.org.uk/articles/10683 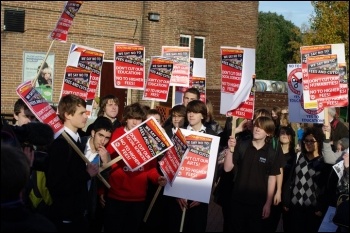 Up to 130,000 school, college and university students walked out on Wednesday 24 November in the biggest education action for 25 years.

There was a mood of jubilation in discovering their strength, and determination to defeat these brutal cuts.

They made it absolutely clear that this movement will not go away; that young people will fight this brutal government over every attack on our right to a future.

A million young people are unemployed and this government is talking about cutting off access to university for all but the rich.

Attacks on Education Maintenance Allowance (EMA) are an attack on the right to a college education. Youth Fight for Jobs called for action on 24 November and led many of the protests, organising many directly and campaigning at schools, colleges and universities for students to walk out and join the protests.

For the 'crime' of protesting a new generation is facing huge intimidation from the media and head teachers and police provocation.

Around the country, groups of young people were protesting peacefully until the police intervened. Police 'kettled' demonstrations in Bristol, in London and violently attacked an occupation in Brighton.

In London, Youth Fight for Jobs had agreed a route with the police to march through Parliament Square.

This was ignored by the Met who were clearly out for revenge for the Millbank protests two weeks earlier.

Most of the media has repeated the lie that the demonstration was kettled because of an attack on an old, rusty police van that had been left in the middle of the road.

However, this was only attacked after protesters had been kettled for some time. In fact many school students tried to explain that smashing up the van would be used by the media to portray them as violent. 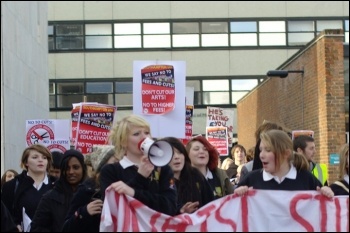 A new generation of young people is entering political activity, and is immediately facing a concerted effort from the media and police to say protesting doesn't pay.

But, while the police and media are successful in making clear their real role as defenders of the establishment, they cannot discourage further protests.

Our movement must oppose all police intimidation and victimisation of protesters, from those arrested for protesting to college students who lose their EMA and school students who walk out and are victimised by head teachers.

Youth Fight for Jobs is organising a legal defence campaign and is appealing for donations to 'Youth Democratic Rights Campaign'.

In London a protest has been called at New Scotland Yard on 11 December and we are appealing for statements to hand in to the police and make it clear what really happened on 24 November.

In every area where we face intimidation we should organise protests to defend our right to campaign.

Before 24 November, the National Union of Students refused to build for further action and NUS President Aaron Porter condemned the call for a national day of walkouts.

If the NUS had put its weight behind the 24 November the protests could have been even bigger and more coherent. 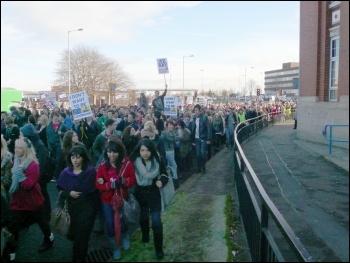 Over 1,400 students from Holy Cross sixth form college and Bury College walked out and marched to a huge rally outside Bury town hall, photo Paul Gerrard   (Click to enlarge)

The scale of opposition has terrified those in power. Most of the population supports the student protests. The Welsh Assembly and Scottish Parliament have already announced that EMA will be saved in their areas.

This is a victory for the movement throughout Britain, and shows that the pressure is having a real effect.

Cameron and Clegg have been forced to come out and argue the case for their cuts to try to stop what little support they have left from slipping away.

The movement must oppose any cuts in education or any public service, and fight for an end to means testing of EMA and its use as a punishment.

We also call for an EMA which covers the cost of living for college students, so that none have to work or drop out because of financial reasons.

There is the money to pay for this. But instead all three pro-big business parties agree with pouring billions into the banks and allow billions to be lost in uncollected taxes from their wealthy friends and wasted on expensive privatisation schemes which line the pockets of the super-rich.

National education shut down on Day X, when fees are voted on 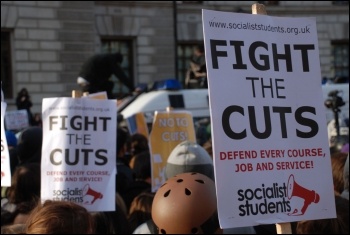 The protests so far have been magnificent, and have shown the anger that exists in society. There is the potential to defeat these EMA cuts and fees increases, and to do that we need to organise to escalate the action, with greater organisation and preparation.

A national, coordinated shut down of education through both student and education worker participation could do this.

Youth Fight for Education calls for school, college and university meetings as well as city and regional coordinating meetings to discuss the next stage in the struggle.

Nationally, Youth Fight for Jobs and Socialist Students are holding meetings on 4 and 5 December. Students who have organised and led protests will speak but there will be a chance to discuss democratically, for everyone to have their say and to agree a way forwards for this movement.

This would also mean we could organise protests and demonstrations with proper stewarding, an agreed route and rallies, etc.

Organising ourselves in this way would help ensure the police could not prevent our right to peacefully protest.

Hard-headed universities minister David Willetts is still keen to push the vote on an increase in fees through before 21 December.

The date of a vote in parliament has to be the main focus point for the movement, a 'day X'. From now plans should be made for a shutdown, for mass walkouts of all students from universities, colleges and schools.

Those who can, should come to London to demonstrate and protest outside parliament in a mass show of opposition.

For those too far away, mass demonstrations should be held in city centres, or outside town halls or MPs' offices.

This is a fight for all of us. Local student unions should put on transport from their institution for all who want to come and demonstrate, but also others from the local area, from schools and colleges without a students union, from local trade unions and anti-cuts campaigns who are supporting student action. 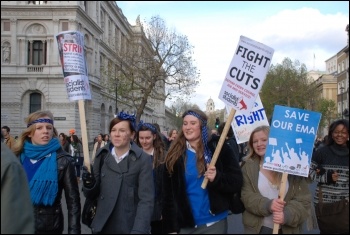 All areas should carry on organising protests, demonstrations, rallies, lobbies, occupations to keep the pressure on between now and the announcement of the vote.

On 30 November there will be a debate in parliament on the issue of fees, initiated by the Labour Party.

This is a disgustingly blatant attempt to gain popularity on the part of the party that introduced university fees 12 years ago, and set up the Browne Review which sparked the current protest movement.

Nonetheless, this will give the issue more prominence and will put extra pressure on MPs, particularly Liberal Democrats, to vote against the proposals.

A protest has also been called at Southbank University where David Cameron had planned to visit, and there should be a mobilisation from across London to that.

Links must also be made and strengthened with the trade union and anti-cuts movements that exist outside of education.

Alongside students losing their right to education, this is also an attack on many workers' jobs - part of a huge attack on all public services.

We need to unite the struggles. Some of the protests on 24 November were initiated by local anti-cuts alliances, and many of the following occupations had speakers from trade unions.

Workers such as the London underground workers who are taking action should be supported by the student movement, visiting picket lines, organising meetings and raising money for strike funds.

Students by themselves cannot have a significant impact on profits, which is at the end of the day what this government and their big business backers care most about.

But by uniting the struggles we can defeat the government. The National Union of Students demonstration on 10 November was a turning point in the fightback against all cuts, not just those in education.

Even if this undemocratic government ignores the vast majority of the population and votes to increase fees, it will not be the end of the movement.

Laws can be changed and repealed, such as the Poll Tax which was defeated by a mass movement 20 years ago.

In the local elections in May, students and student bodies should stand and support candidates who oppose cuts in education and all cuts, and pledge to fight back - individual councils could continue to pay EMA from their own budget for example.

In Wales and Scotland, where there will be new administrations after the May elections, the issue of EMA, fees and cuts will continue to be discussed.

In Scotland especially, where there is no charge for university at present, attempts to introduce fees or a graduate tax will be met with fierce opposition.

In England colleges start phasing out EMA in January; this must be met with a further wave of protests including walkouts.

Chancellor George Osborne stated before the election that this government would be one of the most unpopular in history within six months.

But this movement of students has gone one step further and taken the opposition onto the streets in a way not seen since the Iraq anti-war movement.

The 24 November protests surpassed the hugely significant walkouts against the Iraq war, and made it clear that this is a serious, determined movement with the potential to force back the government.

EMA being saved in Wales and Scotland can be the first victory of many, both locally and on a Britain-wide level.

We need to continue to escalate the action and build the parliamentary debate into a 'Day X' mass show of opposition.