From The Socialist newspaper, 8 December 2010

The fight goes on against fees and cuts 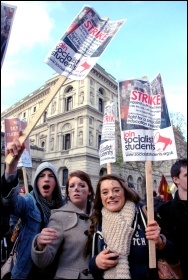 Students protesting against massive fees rise and the abolition of the EMA, photo by Suzanne Beishon   (Click to enlarge)

AN UPRISING has occurred of school, college and university students, fighting for their futures. The trigger has been the trebling of tuition fees, but the anger is wider - against the removal of the Education Maintenance Allowance (EMA), the massive cuts proposed in education, and the robbing of a decent future from an entire generation. The culmination of this phase of the student campaign will be when parliament votes on fees on Thursday 9 December, as thousands upon thousands of students walk out all over the country and demonstrate outside parliament.

The movement has shocked the government and mainstream parties. Already there have been victories in Wales and Scotland. However, defeating the Con-Dem government, ideologically wedded to a rolling back of the welfare state, is a taller order.

Immense anger has been expressed against the Lib Dems who pledged not to increase fees and are now advocating the opposite. Their party is in chaos and their leadership vilified just months after taking their places in the coalition government. Even Tories are wobbling, with David Davis, former shadow home secretary, saying he will vote against the government.

Nevertheless, the likelihood is that the increase in fees will be voted through on Thursday. If so, many young people will be bitterly disappointed and may think that there is now nothing that can be done. Many will be furious and that rage could explode onto the streets.

The first thing young people need to know is that this is not the end. The fees increase will not be implemented until autumn 2012. There is time. The poll tax, for example, was not beaten in one rush; in fact it became law in 1988 and was defeated in 1991. The withdrawal of EMA will start, for new applications, in January. Devastating cuts facing universities will come in over a period of time, with the 80% cut in teaching budgets being declared in April. Massive cuts are planned in further education (FE) funding.

The key thing now is to get organised. Up to now there has been no real overall leadership or organisation, although in many local areas Youth Fight for Jobs/Education has organised the protests. The National Union of Students (NUS) has displayed a complete dereliction of duty. From the high of the 10 November demonstration, the size of which surprised leaders of NUS more than anyone, they immediately plunged to the depths of attacking protesters at Millbank, and have since failed to act. Their call for a "glow stick vigil" on Day X - not even at parliament! - underlines the irrelevance NUS has quickly become to many students. 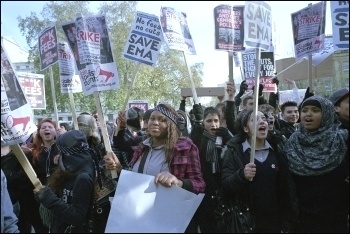 Students protest against proposed tuition fee rises and the abolition of the EMA, 24 November, photo Paul Mattsson   (Click to enlarge)

This is a long game, and we need a strategy. The protests have been exhilarating, but it will not be sufficient to just keep calling days of action on Facebook, as has largely been the case so far. If students do not have a say in what action is called, there is a risk that they will get worn down. It is a step forward that there are now regular London Student Assemblies being called. However, these mainly involve university students, not school and FE students, who have been the most audacious so far.

To defeat fees and save EMA, action on an even greater scale will be necessary. The Socialist Party calls for a huge national shutdown of education in the New Year. This will take organisation in every school, college and university. Students will need their own meetings, to discuss what they are doing and why, to learn lessons from previous struggles, to elect their own committees, and plan serious action.

Where there are no existing anti-cuts campaigns or Socialist Students groups, which is particularly the case in schools and colleges, Youth Fight for Education groups should be set up. Student groups can then be linked up on a city-wide, regional and national level.

Students in colleges and universities need to develop demands of their own college managements. Most occupations currently demand that university vice-chancellors issue statements opposing cuts and the rise in tuition fees. We should go further and demand that vice-chancellors do not implement cuts or fee increases, and instead set deficit budgets and join with students in campaigning for more funding.

Students should also make demands of local councils. It is councils who handle EMA payments and they should be pressured - like the Welsh Assembly - to keep EMA and fund it themselves. It would only cost councils a small proportion of their overall budget, while they mount a major campaign alongside students and parents for government to restore funding. Local anti-cuts unions are demanding that councils do not implement cuts.

Rightly, students are starting to link up with these campaigns, joining protests at councils. Students could go further, and support Trade Unionist and Socialist Coalition and anti-cuts candidates at the council elections in May 2011, demanding that councils maintain EMA. 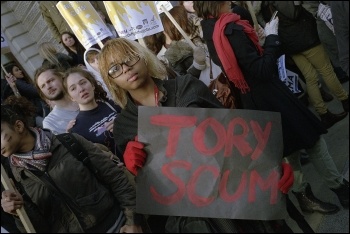 Students protest against proposed tuition fee rises and the abolition of the EMA, 24 November, photo Paul Mattsson   (Click to enlarge)

Students have made a tremendous start but to defeat the enormity of the government's attacks they now need the might of the working class to come alongside them. There is a view amongst some in the student assemblies, and which was on display at the recent Coalition of Resistance conference, that writes off the working class and trade unions, and that simply advocates "new methods" and "direct action".

No one would argue against the freshness and audacity of the student actions. And of course students can achieve victories. In 1985, for example, a national school student strike involving 250,000 defeated the Tories' plans for slave labour YTS 'youth training schemes'. But the scale of the planned attacks is so great, with the capitalist class attempting to force the working class and youth to pay for their historic crisis, that student power alone is limited. The working class, on the other hand, when it moves, can threaten the very heart of capitalism. Strike action can bring society to a halt.

The student movement has been an inspiration to workers. On Day X, the National Shop Stewards Network (NSSN) has called for trade unionists to march behind their banner. How tremendous it would have been if there had been a national Trade Union Congress (TUC) demonstration on 11 December, as the Socialist Party had campaigned for. However, the conservative leadership of the TUC and some of the trade unions cannot hold back the working class forever - the public sector cuts are so devastating that workers will be forced to act. A movement is possible that brings together the energy of youth with the power of the working class. We must now demand that opposition to the increase in fees and the abolition of EMA should be one of the demands of the TUC 26 March demo.

The NSSN anti-cuts conference on 22 January will be an important step in bringing together students and trade unionists. Rooted in the trade unions, the NSSN has worked in alliance with some of the most militant workers at this stage, and in January will be debating launching a national anti-cuts campaign with the organised working class at its heart, alongside young people and community campaigns (see page 11).

The TUC has been forced, by pressure from Youth Fight for Jobs (YFJ) and the PCS civil service union Young Members Network, to organise a youth rally on 29 January. YFJ has decided to call a demonstration to this rally, to gather together young workers, unemployed and students. In March, the teaching union NUT and university and college union UCU are likely to be taking coordinated strike action. It is important that students support these actions. In fact students should visit the picket lines of other workers on strike to make links - as some students did, visiting the RMT tube worker pickets in London in November.

In these early stages of the movement, political understanding is raw, but young people are learning fast and, in tasting their collective strength for the first time, are also questioning everything. For many, an understanding will develop that at the root of this crisis in education is a crisis of capitalism, and that a socialist alternative is necessary.

This is just the start!

The fight goes on against fees and cuts

30 November: student day of action on cuts and fees

Con-Dems can be defeated: Welsh Assembly backs down on EMA and fees

All-Britain Anti-Cuts Campaign to be launched

Housing under attack: Ripping off the roof over our heads

Kazakhstan - a repressive and corrupt state