Link to this page: https://www.socialistparty.org.uk/articles/10839

Round two of Heinz strike 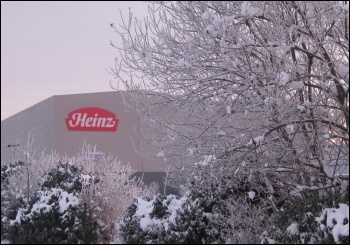 Over 1,000 Unite trade union members at the Wigan Heinz food factory struck for a second day on Tuesday 21 December in pursuit of fair pay, mounting strong pickets despite freezing temperatures.

I and a Bolton Socialist Party member (an activist in Unison) were warmly welcomed on the picket line.

Unite submitted a 4.3% pay claim last April, based on RPI inflation at the time plus a very small fraction.

Heinz is a $10 billion multinational which last month boasted that its "gross profit increased 1.4% to $967 million and gross profit margin increased to 37.0% from 36.0%" (www.heinz.com, press release dated 19 November).

When workers asked for a tiny real-terms increase in wages, the company's lead negotiator flatly refused: "There's no way we're going near RPI this year".

The most Heinz will offer is 3.3%, well below inflation. So, facing a real-terms cut in wages, literally 90% of workers are taking rock-solid strike action.

"We've not been badly covered in the press, and we're really heartened by the loads of supportive messages that we've received including from the likes of yourselves.

"We've been getting emails from all over the country.

"This is the second day of strike action now and no-one wants to do it, but withdrawing your labour is the only weapon in the working-man's arsenal as a final resort against the employers.

"It's a silver bullet, and when it's fired, it's fired! It's certainly not something we'll give up easily."

Management are notoriously vindictive, persecuting workers for taking time off sick to deal with close family bereavement, and even turning off the floodlights last week on the picket line.

"Of course", says Ian, "here we have to deal with a style of management that has a jackboot on our necks.

"They don't have to be here, they could be sitting at home or somewhere else, but they're here on the picket because this matters to us and that's how passionate they are about it."

Ian estimates the company has lost "probably £3 million" from two days' strike action plus the difficulties of re-starting up production last weekend during the cold weather.

This begs the question, why is Heinz sticking over 1%? It confirms what workers are saying; there is a wider agenda from the food industry employers, to drive down pay. Behind Heinz, stand many other company bosses. That doesn't put beans in tins though!

"What they give with one hand, they take away with the other.

"Management said they wanted harmonious industrial relations and wanted to work with the union.

"In fact they've done exactly the opposite.

"There's been this letter leaked to the press talking about 480 job losses.

"We're trying to work out whether this is really serious or just trying to scare workers off the strike.

"We know the hard way though, that what the company wants to do, it will try to do regardless.

"Ten years ago they tried playing us off against the plant in Harlsden in London, where they signed a no-strike deal.

"The company then shut the Harlsden factory anyway, and a lot of the lads from there had to transfer up to here."

The immense potential power of the industrial working class is clear, as this giant factory stands eerily silent, brought to a halt by 1,000 strikers.

If these prove unsatisfactory, workers will strike again on Wednesday 29 December.

As many supporters as possible - Socialist Party members, supporters and the wider trade union movement - should join the Heinz workforce on the pickets if the strike goes ahead.

Send messages of support to wrightian5@sky.com

Can your union branch or organisation make a donation to help fund the workers' struggle? This can be done by bank transfer to account name Ian Wright, sort code 08-92-86, account number 16085255, account held with the Smile bank. Or contact Ian for more information.

And please send messages of protest to the company bosses, details in previous report at http://www.socialistparty.org.uk/articles/10835

Workers at Heinz strike in Wigan