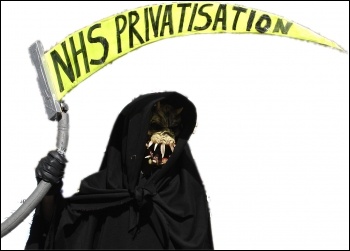 Death and privatisation in the NHS, photo Paul Mattsson   (Click to enlarge)

Last month an article appeared on the Unison Health website from national officer Mike Jackson which announced a "tough choice" for Unison members.

He is referring to an offer from NHS employers to guarantee no compulsory redundancies in England in return for agreeing to freezing pay and incremental progression for two years.

This is a meaningless offer which would benefit the bosses by freezing staff pay but would not save a single NHS worker's job.

'Voluntary' redundancies would continue as would forcing staff onto lower pay bands through departmental restructuring. The end result will still be patient care suffering while thousands of NHS jobs are lost, with the remaining staff having to pick up their workloads.

The Unison Health group executive meets on 10 January. The initial feedback from Unison members is to reject the deal.

But it should not even be considered for consultation. It is an abdication of responsibility by Unison's leadership who are clearly unwilling or incapable of organising resistance to the Con-Dems' attacks on the NHS.

They have learnt nothing from the experience of the Irish trade unions, who have cooperated with attacks on their members' living standards in the name of partnership, only to face further demands for cutbacks from right wing politicians and the bosses.

This proposal should be thrown out and treated with the contempt it deserves. NHS workers should not have to pay the price for the bosses' crisis, either through job losses or cuts in pay.

The leadership of health trade unions should launch a proper campaign to protect terms and conditions, with a decent pay rise.

The National TUC demonstration on 26 March and the trade union conferences starting in April should be focal points to re-galvanising opposition to all public sector cuts.

We should be joining our brothers and sisters in Spain, France, Portugal and throughout Europe in resisting the bosses' attacks rather than feebly giving up the fight before it has even started.

Every NHS trade unionist should demand that their union rejects this lousy deal and raise the demand for national industrial action against NHS job losses, pay cuts and privatisation.