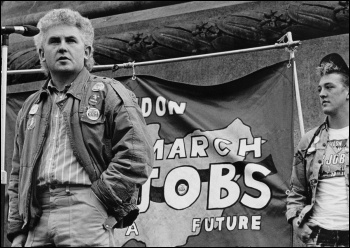 John died of a brain tumour which he had been fighting for two years. John will be remembered as a committed socialist and advocate of socialist ideas, a courageous class fighter and a militant leader in his work for the Public and Commercial Services union (PCS) and the wider trade union and labour movement.

John was born in Glasgow but moved to London in his teens where he worked for the Ministry of Transport. He quickly became involved in the Civil and Public Services Association (CPSA), the precursor to PCS and held a number of elected offices before being appointed to a CPSA full time post in 1970.

As an activist in the Acton Young Socialists and the Labour Party, it was only a short while before John became attracted to the ideas of Militant, forerunner of the Socialist Party.

At that time there was only a handful of Militant comrades in the CPSA, however over the following decade, Militant's influence grew and Militant supporters occupied positions at all levels of the union, including the union presidency and vice presidency.

John was a key comrade in this growth of Militant's ideas and influence. He attracted support for the left through his inspirational speeches. 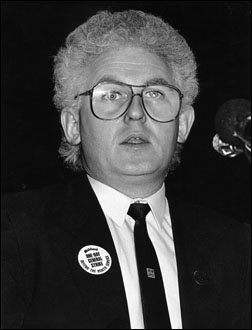 He was, at various times, the Broad Left candidate for CPSA/PCS general secretary and deputy general secretary. He gained loyalty through his untiring work to build a strong, fighting union. He earned respect for his firm advocacy of democratic accountability within the union.

Wherever John worked he inspired members and activists to aim high and fight hard. An example of this was in 1977 when he led one of the longest and most successful strikes in CPSA history - the Civil Aviation Authority air traffic control assistants' dispute.

In 1986, as Broad Left candidate for general secretary of CPSA, John was elected, but robbed of this victory by the union's right wing, led by president Marion Chambers. Despite being probably the fairest elections in the history of the CPSA, accusations of ballot rigging resulted in the courts sanctioning a re-run of the election. In the re-run, the ruling class, awakened to the threat John posed to their interests, mobilised the full force of the state and the media to ensure his defeat.

But they could not stop him being elected as deputy general secretary in the election that followed. And when the left took control of the union's National Executive Committee, John was the union's representative on the TUC's General Council.

John was unsuccessful in the next set of union senior officer elections five years later.

When asked how he would deal with this disappointment, ie setback to his 'career', John replied that he was proud and privileged to carry the banner of the left, this was a temporary defeat for the left but it was not a personal setback for him because, as a Marxist, he did not see such matters in these terms! 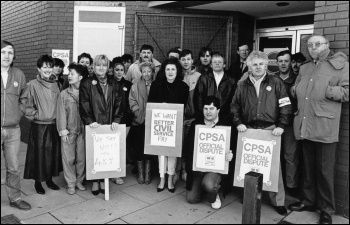 True to his convictions John continued his work in the union as a national officer, his enthusiasm and commitment undiminished. Although no longer a senior officer, John continued to be seen as the voice of the left within CPSA and the merged union PCS.

When Mark Serwotka became general secretary in 2002 he asked John to be his personal assistant which turned out to be an inspired choice. When the right wing tried to remove Mark from office John was able to recall his own experience and mastermind a defence of Mark's election victory both within the union and at the law courts.

John retired from the PCS union in 2005 but to the end maintained close contact with it and with Socialist Party comrades.

There will be a commemorative rally for John, details to be announced soon. A Socialist Party fighting fund in John's name has been set up at the request of Terry Adams, with the support of John's wife, Roisin. Please send donations to the Socialist Party, PO Box 24697, London E11 1YD.

"It is not possible to exaggerate the importance of John's work for the trade union and labour movement. The best most of us can hope to do is attract support for our ideas in ones or twos.

"John's powers of persuasion, his commitment and his courage moved people in their tens, their hundreds and, on occasions, their thousands. No time for sadness, too many great memories of a friend and comrade.

"I've asked the Socialist Party to set up a fighting fund in John's name and call upon comrades to give as generously as they can".

The following tribute from Socialist Party general secretary Peter Taaffe, written on behalf of the Socialist Party and CWI, was read out at John Macreadie's funeral in France on 28 December.

For over 40 years John was a friend and a comrade in our common struggle against capitalism, and for democratic socialism.

He was not just a fighter in the ranks of both Militant (now the Socialist Party of England and Wales) and his union, but was marked out by a unique ability as a strategist and tactician in the battle against brutal employers and their governments.

What a contrast John was to all those place-seekers and opportunists, unfortunately many within the labour movement, who were prepared to sell their principles for wealth and position.

Never was this clearer than when he was democratically elected as general secretary of the Public and Civil Servants union (PCS) on a platform of a workers' representative on a worker's wage, only to then be undemocratically removed by a right wing cabal within the union, backed up by the capitalist establishment.

He was unstinting to those he trusted. I cherished his honesty and his friendship.

No matter how difficult the problem, John would confront the unvarnished reality with clear ideas and was not afraid to ruffle feathers - even with those closest to him!

He was one of the most treasured and best-educated socialists and Marxists I have met. This was a product of his Scottish working class background where he was 'educated' in the best school - the school of adversity, further sharpened and deepened by his experiences of socialism and Marxism and the labour movement.

He was also a charming companion to me and hundreds of others in the ranks of the Socialist Party and the Committee for a Workers' International. We will all miss him, as will Roisin and his family.

He will never be forgotten. We will continue his work.

John Macreadie memorial - A celebration of his life