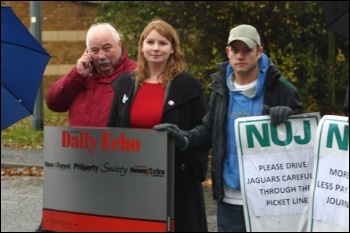 Journalists, members of the NUJ, on strike at Newsquest in Southampton, photo Nick Chaffey   (Click to enlarge)

Joining fellow Newsquest staff around the country, members of the National Union of Journalists at the Northern Echo and its sister papers in Darlington held a solid strike on 6 and 7 January. This is part of coordinated action throughout the Newsquest group over job losses, failure to raise pay for the last four years at Darlington, and the ending of the current pension scheme.

Newsquest has responded to the planned strikes with a paltry pay offer of 2%; while the chief executive, Paul Davison, got a whopping 21% pay rise to £609,235 a year.

Management is now commencing negotiations with the union on the proposed job cuts. This is seen by the branch as a welcome development.

The atmosphere on the picket line was electric; over 70% of the news room staff lined both sides of Crown Street chanting and receiving support from passers by, motorists, and bus drivers.

The strikers were joined by representatives of the trades council, Unison and journalism students from the local college.

The strikers held an impressive impromptu 50-strong march around Darlington town centre with banners and placards.

This will be the first of many protests the town is likely to see this year.

They have pledged to support the campaign against the cuts in Darlington where the Labour council is planning to implement 25% cuts to jobs and services.

Messages of support to

After similar action in Blackburn the employers presented an improved offer.

A Newsquest employee told The Socialist: "I believe we can chalk up a partial victory.

"Newsquest were adamant there'd be no pay increases but with the strike action in Brighton and Southampton, and votes to strike at loads of centres across the country, they've suddenly found 2%."