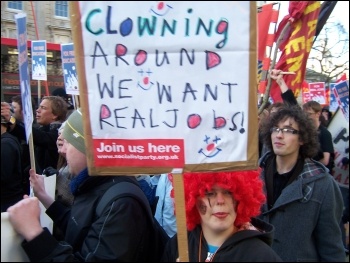 The government and the leaders of big business met recently to discuss solutions to the unemployment crisis currently facing young people. Their verdict: young workers must accept low paid, casualised jobs, with employers having the right to dismiss people at will and big business entitled to tax breaks for going to the 'trouble' of taking a young person on.

The multi-millionaires running top companies such as Marks and Spencer, Tesco and McDonalds, each making colossal annual profits, all seemed to agree that there was simply no way they could afford to take on unemployed young people without special 'help'.

Hearing their demands, the government is now preparing to institute a new "employers' charter", which will allow companies to sack workers at will within two years of their being taken on. The employee will have their right to bring a charge of unfair dismissal in their defence attacked.

This crass insult to young people searching for work will be met with anger by those fighting for the right to a decent job and a future. The Youth Fight for Jobs campaign says no to casualisation, slave labour 'workfare' schemes and unemployment. We fight for jobs for all with decent terms and conditions and with a living wage.

If profit making companies cannot afford to provide this, then they must be taken into public ownership and run under democratic control in the interests of the many rather than the few. On 29 January, we will march - workers, students and the unemployed together - against this government of the rich and for the right to a decent future for all.

My members who work in Jobcentre Plus share the concerns about a generation lost to unemployment because we meet them every day and see their desperation as we try to find them work. Job vacancies fell in December so it is getting harder to help them.

What makes it even more difficult is that we don't have enough staff. During the recent recession the then government recruited an extra 15,000 temporary job centre staff and they helped us to do a fantastic job.

In the March 2010 budget, the then chancellor was forced to announce an unexpected saving to the economy of £4 billion made by my members getting people off the dole and back into work quicker. The current government has only kept some of those temporary staff on despite the fact that unemployment has not fallen and is predicted to rise this year to 2.7 million - that would be a 17 year high.

The government needs to invest in jobs - including in Jobcentre Plus. My prescription is simple and everyone can see how it would work - investing in jobs would take people off the dole queue to work in Jobcentre Plus to help others find work and save the economy money at the same time. It would be economic madness not to.

PCS is fighting the cuts and for the staff we need to deliver the services we all depend on as unemployment rises.

Jane Aitchison, PCS President in the Department of Work and Pensions

Looking at the job centre website for my area says it all about employment prospects for young people today: low paid, unskilled and insecure. This is in one of the most industrial parts of London!

The company I work for employs a great many young people, 70% are under 25 in my workplace. At busy times like Christmas, we have even more. They all come from agencies, who pay them slightly more than the minimum wage, and do not pay them a Saturday or Sunday premium. They do not even get a guaranteed amount of hours a week, and are basically employed on a daily or half daily basis.

There is a real need for all young workers, including young women and migrant workers, to have the same rights as older workers. The minimum wage should be set at a level that is possible to live on, and should be the same for all workers, whatever their age. Those working for agencies need to be paid the same as permanent staff and be offered a real chance at permanent work.

There is a real need for skilled workers in this country, in the NHS and public services, as well as in building and other infrastructure. However, today, apprenticeships can turn out to be just as insecure as agency work, with young people being unfairly dismissed by their employers before they have qualified. Some employers will use apprentices as cheap temporary workers, as they do not even have to pay them the minimum wage, or offer them a permanent job when they qualify.

There is a need for the government to invest in developing infrastructure and housing, especially green infrastructure, which will give young people real opportunities to learn real skills, as well as being of benefit to society. In public services, there are shortages of teachers, doctors and nurses - areas again where young people can be given chances to make a real difference in society.

The public sector unions need to be fighting to defend and extend our public services to create opportunities for young people, and private sector unions, especially the general unions, need to start a real campaign to unionise temporary workers and the unemployed.

In the end, it will take a different type of government, a socialist one, to stop the slide into a future of low wages and high unemployment, and that is what students, young people and trade unionists need to fight for.