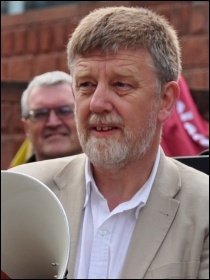 Dave Nellist (at NSSN lobby of TUC) took only a skilled worker's wage while an MP, photo Suleyman Civi   (Click to enlarge)

ON 7 January 2011 the former Labour MP for Bury North, David Chaytor, was sentenced at Southwark Crown Court to 18 months' imprisonment for 'false accounting'.

He had pleaded guilty to using a fake tenancy agreement and then claiming just over £20,000 in Parliamentary expenses to pay rent on a house in Westminster which he in fact already owned and on which the mortgage had been paid.

Chaytor had previously failed in the Court of Appeal, together with other politicians, to claim that 'parliamentary privilege' should make him immune from prosecution for fraud.

On 11 January a second (and current) Labour MP, Eric Illsley, pleaded guilty to fraud, involving £14,000 of false claims for his 'second home'. He will be sentenced in February.

Illsley has now said he will resign as an MP, and a by-election will now follow in Barnsley in due course. The police are apparently investigating several other politicians - and two ex-MPs and two peers have already been charged with similar offences to Chaytor and Illsley. But there's more.

Recent press reports now talk about other, possibly new, cases being raised by an MP, who is said to be angry that he was 'unfairly singled out over his own claims', and has 'shopped' two ex-Cabinet ministers and four MPs; three from the Labour Party, two Conservatives and one Liberal Democrat.

The anger and disgust that people, already privileged with high salaries and positions, should then fraudulently claim thousands of pounds of expenses to which they were not entitled, is widespread.

A recent British Social Attitudes survey found that 60% of those questioned thought politicians "almost never" told the truth and only 28% trusted MPs not to fiddle their expenses.

The new rules set up in the wake of recent scandals in Parliament are administered by the Independent Parliamentary Scrutiny Authority; and already some MPs are complaining about it.

Those MPs will clearly have the heartfelt sympathy of tens of thousands of families who have had to challenge benefit decisions, or who now face massive cuts in essential services as part of the biggest austerity programme for generations. Or perhaps not!

MPs are already very privileged, receiving a basic wage almost three times the average. That, and the level of their generous expenses allowances, insulates and isolates them from the normal problems affecting the majority of the people they represent.

The Socialist Party requires all its members elected into public positions, such as MPs, to take the same wage as that of a skilled worker. When myself, Terry Fields and Pat Wall were MPs in the 1980s, that worked out at around 40% of an MP's wage, or the equivalent of £26,000 today.

The 'surplus' was donated to socialist and trade union campaigns and causes, and accounts were regularly published in newsletters to be transparent.

Expenses should only be allowed where clearly necessary to do the job, and again be published and accountable, particularly to the working people locally who had elected that representative.

Much of the protocols of an MP's life, and the privileges lavished on them, are designed to suck them into defence of the system, so that (whether consciously or not) they feel more in common with the rulers than the ruled.

Breaking with those traditions, living in the area that you represent, and on the same wages, facing the same bills and problems as working people in a constituency can go some way to countering those pressures, and start restoring faith that elected, socialist officials would be different.

Only the Socialist Party regularly and consistently argues for that, and has the track record to prove it is not just simply words.