Con-Dems and councils swing the axe 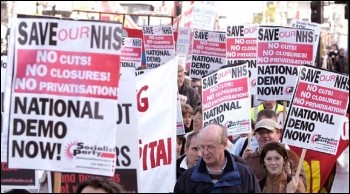 Over 100,000 jobs are already under threat in local authorities as Labour, Tory and Liberal councillors swing the Con-Dem axe. It is estimated that for every one of those jobs lost, someone in the private sector will lose their job too. The fight is on against all cuts in jobs and services.

Two thousand jobs are to be lost at Labour-led Manchester council. Other authorities in north west England will announce hundreds or thousands of redundancies. The GMB trade union says that 113,765 jobs are at risk at 145 councils, around one-third of local authorities.

So nationally up to 700,000 public and private sector jobs could go through council cuts. Privatisation, outsourcing, and the proposed devastation of other public services will raise this figure much higher.

But this does not have to happen. Councillors have a choice over making cuts. As the main parties agree that cuts are necessary, most councillors just grumble while sticking the boot in.

Councils should refuse to carry out the cuts. They should use their reserves, and if necessary borrow, to safeguard jobs and services while building a real campaign to make the Con-Dems retreat and provide the money needed.

Locally, it will take action, including strike action, to force a change in course from councils. It will also take a national struggle, including coordinated strike action across the public sector, to beat back the government.

But what is the alternative? Another one or two million people on the dole this year? "Decades of austerity," promised by prime minister Cameron? Total privatisation of the NHS, planned by health minister Lansley? Working class youth barred from education through fees, charges and no meaningful grants? The Con-Dems offer us a "future" that looks like the 1930s, or even the 1830s!

Our alternative is simple. The national debt is sky-high after bailing out the banks, who are about to dish out bonuses by the £billion. We say: it's our money, take it back!

Big companies like Vodafone and super-rich individuals owe up to £120 billion in unpaid tax. Collecting that would start to plug the hole which the Con-Dems intend to fill at our expense. Another vital measure would be taking the banks, utilities and other major companies into public ownership under democratic control.

This is a battle for our future. Either we defend our public services, jobs and living standards, or we are thrown back to an era of mass unemployment, deprivation, misery and want.

Decisive action from trade unions, youth and communities, can smash this weak coalition. Divide-and-rule tactics from Westminster and the town halls can be answered with: "No to ALL cuts in jobs and services!"

That is what Socialist Party members and others will put forward at the NSSN anti-cuts conference on Saturday 22 January. If you agree that we need decisive action to stop all cuts, come to the conference.