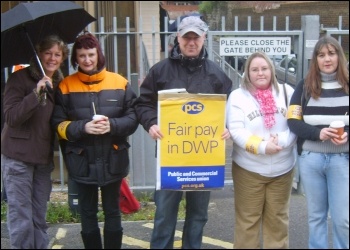 PCS members in Jobcentre Plus who have been compulsorily transferred from benefit processing into contact centres will be taking strike action on 20 and 21 January over our working conditions.

The only thing that is important to our management is hitting call centre targets about how many calls are answered and how quickly the public can be fobbed off.

We are angry that the quality of the calls and really dealing with the public takes a low priority.

We clearly see that the work of coping with high volumes of calls is just being shunted to our fellow PCS members in benefit processing. This is frustrating for us as we are prevented from addressing the individual's issues and frustrating for the public as there will be further delays in being dealt with whilst they wait for a call back within three hours from busy processing teams. January is always a really busy month with large numbers of people making claims for Jobseekers' Allowance.

Customer service is constantly being quoted at us as the reason for the reorganisation. But as experienced benefit processors, we can clearly see ways that our jobs could be improved by being able to resolve more on the phone and straightaway with the public. This would also remove some of the inefficiency and delays that are built into this system.

The quality of services is really important, given the drive from the previous government and pushed forward by the coalition government, to limit people's access to public services. More and more is being done remotely by phone and the internet rather than face to face.

Our members can be disciplined for inefficiency if they continue to spend too long on the phone, using their judgement when dealing with the public and not conforming to the rigidly tight call times target.

After winning a ballot with an over 70% 'yes' vote for strike action in November, management was brought back to the negotiating table for talks over Christmas and New Year.

The talks broke down on 10 January when it became clear that management has no respect for our members nor the services we want to deliver to the public. Our members have worked flat out during the recession and continue to do so with the high unemployment since. But the Jobcentre Plus contact centre management does not believe that we can provide services without being constantly monitored every minute of the day.

We are building for a strong turnout on the strike days. If management refuses to move then we are ready to ballot all the contact centre staff across Jobcentre Plus to escalate the dispute.