Link to this page: https://www.socialistparty.org.uk/articles/11305

Cardiff march and rally against cuts 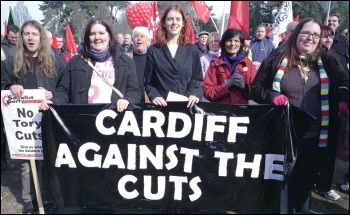 Thousands of workers, students and anti-cuts campaigners marched through the centre of Cardiff on Saturday 5 March to send a message to the visiting Con Dems - we don't accept your cuts!

The marchers set out from City Hall at 11am and made our views known outside the Welsh Lib Dem conference at the Angel Hotel before making our way to the Wales TUC rally at Sophia Gardens alongside the Tory conference at the SWALEC stadium.

Trade unionists were out in force and the march was a colourful sea of Unite, Unison, GMB and FBU banners, along with those of Cardiff, Swansea, Merthyr and Torfaen trade councils.

The rally was initiated by Cardiff trade council and backed by Cardiff Against the Cuts, the Wales Shop Stewards Network and others, before the Wales TUC agreed to back it.

The lack of constructive ideas on fighting back from most of the rally's speakers vindicated the decision to put pressure from below on the TUC and to oppose all cuts. 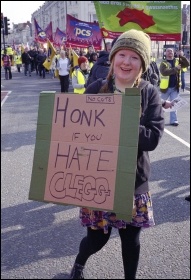 Welsh First Minister Carwyn Jones condemned the government but then praised the alternative Welsh Way which includes a Memorandum of Understanding on sacrificing pay, pensions and conditions to supposedly avoid redundancies and which has already led to savage attacks by two Welsh councils on their own workforces.

Far and away the warmest reception was given to PCS general secretary Mark Serwotka who told the rally: "We've got to give them the loudest possible message that we are not going to accept it.

"We should oppose every single cut wherever they propose it, and that includes the Labour councils in Rhondda Cynon Taff and Neath Port Talbot ... We will have to take mass industrial action to defend our jobs, pensions and services". 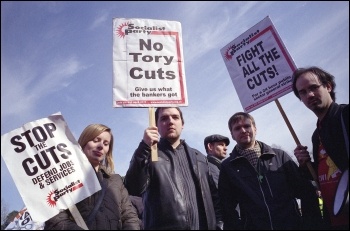 The rally was followed by a Socialist Party public meeting in the nearby Holiday Inn to explain why we need to build up our forces to provide a socialist alternative within the mass movement.

Two new recruits signed up, one saying: 'This meeting has convinced me, I'm joining'. Many of the South West Wales contingent then headed back to Swansea for a protest outside the Globe Inn, Landore, where BNP leader Nick Griffin was marshalling his forces for the Welsh Assembly elections in May.

Around 70 protesters were prevented by a police line from reaching the pub but we still held a noisy demonstration making it clear that Griffin and his racist followers are not welcome in Swansea.