Take over the power and building industries! 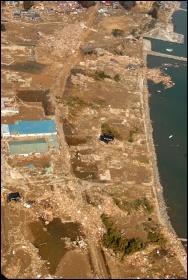 Japan: earthquake and tsunami: an aerial view of tsunami damage in Tōhoku, photo from Wikipedia   (Click to enlarge)

Millions around the world watched, read and listened in horror to the reports coming from Japan on 11 March and the days that followed. Thirty-foot waves, whole trains and even villages were swallowed up by the monstrous catastrophe, and then came the unfolding disaster at the nuclear power stations.

The images of devastation, the tales of loss and grief and the fear of what is to come for the people in the affected area have aroused massive sympathy.

In Germany on 12 March a scheduled anti-nuclear protest was swelled by tens of thousands, angry at the urgent threat posed at the Fukushima Daiichi plant and by nuclear power. On 14 March over 100,000 were out on anti-nuclear protests in 450 towns and cities across Germany.

Here members of the Committee for a Workers' International (CWI, the world socialist organisation to which the Socialist Party is affiliated) report from Japan, Hong Kong, Taiwan and China.

The initial response to the quake has been one of shock and disbelief at the images coming from the Tohoku area. Although Osaka is several hundred kilometres from the areas affected by the devastating earthquake and tsunami, many people here have family or friends in the areas directly affected by the disaster. There is a general air of depression and despondency hanging over society. Comparisons have been made to the devastation following World War Two, although obviously the area affected is much more limited.

There is also nervousness about the prospect of a nuclear disaster as the authorities struggle to prevent a total meltdown in at least three nuclear reactors.

Representatives of the government and the Tokyo Electric Power Company (TEPCO) have appeared on television to tell us that the situation is under control and to reassure us that the amount of radiation people in the area have been exposed to is less than one CT scan.

People are generally sceptical about this. Japan's privately owned power companies and nuclear industry have a history of attempting to cover up accidents such as those at Monju in Fukui prefecture in 1995 and Tokaimura in 1999.

Most people believe that the government is underestimating the severity of the crisis so as not to provoke panic. Sections of the foreign business community are already fleeing Tokyo. The US seventh fleet, with the aircraft carrier "Ronald Reagan", which we were told was standing by to "provide relief", has withdrawn to a safe distance from Fukushima after detecting radioactivity.

Most of the Japanese population have nowhere to flee to in a nuclear emergency other than to sleep rough on the floor of an elementary school gymnasium or other public facility. 180,000 people have been told to evacuate their homes in the area around the reactors.

The anti-nuclear movement in Japan has long warned about the dangers of building reactors on or near to major fault lines. There have been ample warning signs such as the damage to a TEPCO plant in the Chuetsu-oki earthquake in 2007.

However Japanese capitalism has become heavily reliant on atomic energy, with nuclear reactors providing 30% of its power. Even if they succeed in avoiding a major nuclear disaster this time around they are going to face a major energy crisis with many of their reactors out of action.

In the case of Fukushima the use of sea water to cool the rods means that these reactors will never be restarted.

The authorities are now organising rolling power cuts in Eastern Japan, as well as urging consumers to economise on energy consumption. Incredibly though, Japan lacks an integrated national power grid. The industry is dominated by ten private regional power companies. Although the power supply in Western Japan is unaffected by the crisis, it is difficult to divert power because the grid in Western Japan functions on 60Hz, as opposed to 50Hz in the east. There are only three plants that can convert power generated in the West for use in the East.

A genuine workers' party in Japan would call for the nationalisation of these ten regional power companies under workers' control and management. This would enable a phasing out of nuclear power and the development of alternative energy sources.

As the only country to have had nuclear weapons used against it, there is a strong fear of the effects of radiation and the population is particularly sensitive to the nuclear issue.

Over the next few days people's attention is going to be focussed on the relief efforts. In the Hanshin earthquake of 1995 trade unions and community organisations ran their own relief efforts. Unions in the Kansai area are already discussing doing the same.

Many young people interviewed on TV in areas unaffected by the quake express a desire to do something to help those in the affected areas. As the days turn to weeks though, the focus of people's attention will shift towards reconstruction and the rebuilding of their communities.

Much has been made in the foreign press about the strict regulations governing building construction. However, this is far from reality. While regulations have been tightened over the years, collusion between the contractors, politicians and city planning departments means that building regulations are often not enforced.

In the Hanshin [Kobe] earthquake in 1995 many poor and elderly people were living in temporary accommodation years after the quake because they couldn't afford to rebuild their houses. Most of the money provided for reconstruction was put into large infrastructure projects that provided business for the contractors, but little help for those made homeless by the quake.

Socialists would argue that the rebuilding should not serve the interests of private developers. The large contractors should be nationalised under workers' control and management and communities rebuilt according to democratic plans drawn up by neighbourhood committees, community and workers' organisations.

The economic effects of the disaster will be severe. The Japanese stock market fell over 10% in one day. Japanese prime minister, Naoto Kan has talked about a "New Deal" effect with reconstruction leading to a recovery of the economy.

It is true that after the 1995 Hanshin earthquake, after the immediate negative effects of the quake had worked their way through the economy there was a limited recovery helped by reconstruction. While it can't be ruled out that something similar could happen, the destruction is on a much larger scale than in 1995.

State finances are in a much weaker position than they were in 1995. Already the Democratic Party government has retreated on promises to increase child benefits and is attempting to build support for an increase in consumption tax. They argue this is necessary to support pensions and welfare for a rapidly ageing population.

There is little doubt the Japanese capitalists will attempt to place the burden for this disaster on the shoulders of workers and the poor. This will inevitably provoke resistance.

The Socilaist carried an edit version of this report: Earthquake could leave "tens of thousands" dead and nuclear threat

Building the battle against the cuts - now and beyond 26 March

Vote for a socialist alternative

The rich get richer - by another $1 trillion

March from Jarrow with Youth Fight for Jobs

Save our youth services

For real jobs not exploitation

Privatisation threat to the blood service?

Tunisia: 'You come back - we come back'

Students want to protest too

Thatcher was no heroine