From The Socialist newspaper, 6 April 2011

Our prescription: mass trade union action to save the NHS 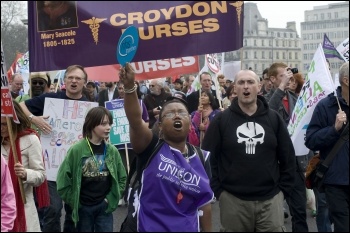 Tory health secretary Andrew Lansley has said that the government will "pause, listen and engage" before continuing with NHS 'reforms'. For this read 'wait, spin and ignore' until after the local government elections in the hope of avoiding a drubbing.

Many media commentators have reported an apparent wavering by the Con-Dems in their plans to drive their 'Health and Social Care Bill' through parliament. This legislation represents a giant leap toward total privatisation of the NHS - with big business licking its lips at the prospect of making enormous profits. But we shouldn't be fooled by announcements that this attack may be watered down.

However, the recent show of strength by half a million organised workers on the TUC demo in London and opinion polls showing high levels of satisfaction with the NHS, have had some effect on David Cameron and his ministers. With more pressure the government may yet be forced to back down.

What's in a name? It's a curiosity of history that the Holy Roman Empire wasn't holy, Roman or an empire. Are we soon to have a National Health Service (NHS) that is neither national nor a health service but competing bodies moving steadily toward the status of private companies, some via the camouflage of 'social enterprises'?

The Tories in particular feel they have perhaps the first real opportunity to get rid of the NHS - an important and symbolic victory for socialism in our history. They are unlikely to substantially reverse direction without maximum pressure.

We must not slacken our resolve to defeat this attempt to drag us toward an inefficient and socially destructive US-style free-for-all in health care, in which workers and the poor are unable to afford private medical insurance. Campaigns and action must continue and be stepped up, especially in the workplace.

Workers in the NHS are already feeling the effects of government moves to full privatisation. Across the country nurses and other staff are finding their jobs being 'down-banded' or deleted. Services are facing massive cutbacks, particularly in specialist areas such as mental health.

A relentless series of attacks to reduce labour costs is taking place to prepare the ground for profit making. Waiting lists are increasing, elective surgery is being reduced, preventive medicine is being sidelined.

The mainstream media continues to repeat the line that health commissioning is being handed over to GPs. It is not. The commissioning function will be largely carried out by private consultancies and the big four accountancy firms.

The pressure is on the health trade unions, including the largest, Unison, to organise an effective fightback. Such a campaign must unite health workers and community campaigners in defence of the NHS as a fully publicly funded and democratically run public health service.

The government assault on the NHS is part of its general offensive to rip apart our public services and accelerate privatisation. The trade unions must come together in a 24-hour public sector general strike as a starting point to roll back the privatisation juggernaut.

Bristol meeting - The battle of our lives has begun

Teachers and council workers strike together in Tower Hamlets