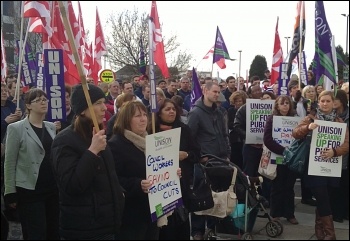 Southampton refuse workers finished their first strike action against cuts to pay, jobs and services on 27 May. It was 100% solid. Pickets received support from other trade unionists in the city including stewards from the Medirest NHS cleaners' dispute at Southampton general hospital.

Support has poured in from around the country and internationally. News of support from the United Steel Workers of America was cheered at a mass meeting on the picket line.

The mood is solid, determined and angry, especially at the arrogance shown towards the strike by Tory council leader Royston Smith. He has made contradictory statements in the press saying he won't meet for negotiations then saying he will meet with ACAS.

Unite officer Ian Woodland said: "Our executive has made it clear we oppose all cuts in pay, jobs and services. Not a penny off our pay, not a minute on the day. This is a completely political attack on public services."

Selective strike action will continue with all workers in parking services out on strike for seven days from 31 May. A mass meeting of council workers will be addressed by Len McCluskey, Unite general secretary.

Unite's recent executive statement, making clear the union's opposition to all cuts and the need for generalised industrial action, has raised the confidence of the workers.

The support on the picket line needs to be taken to the streets with a mass demonstration to link workers and service users in a huge show of strength to force the Tory council into retreat. The call for council-wide strike action was raised on the picket lines and will certainly become part of the discussion on how to win this dispute.