Link to this page: https://www.socialistparty.org.uk/articles/12200 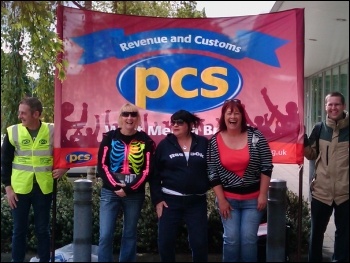 On Tuesday 7th June, PCS union members in Revenue and Customs (HMRC) offices across the UK walked out at 4pm-5pm in protest at the 'attendance management' policy that was recently imposed.

The following day, we started work at 10am and then walked out from 11.30am-1.30pm for a mass extended lunch break. This policy can be seen as a cynical attempt by HMRC management to make it easier to sack people.

This can, technically, lead to staff having formal action taken against them after just four days off sick. CEO Leslie Strathie argues that HMRC has the highest sickness absence in the civil service, but in the last staff survey HMRC came 103rd out of 103 government departments to work for.

Over the last few years, because of massive cuts in staff, incompetent management, oppressive working conditions and other indignities, the department has been in meltdown, with various major fiascos such as millions of wrong tax codes being issued and well over a million unsuspecting people having being found to be underpaid and receiving letters.

The sheer amount of upset to the public these events, among others, have caused has naturally led staff to be stressed. A recent stress survey in my office yielded extremely poor results.

A majority for strike action was originally gained in early April. However, action was put on hold for two months while the HMRC PCS group executive committee negotiated with management.

These talks brought some improvements, but management are holding firm on the three absences/five day rule, which is completely unacceptable.

Socialist Party members visited HMRC offices in Leeds and Bradford to offer support to workers taking part in the strikes.

Unfortunately, in both areas after union members walked out on Tuesday a lack of organisation meant that most of them simply went home without any opportunity to really gauge the strength of the workforce in action.

On the Wednesday, whilst action in Bradford was limited to a small picket line outside one of the offices, a successful meeting was held with staff at the office in Leeds, with over 20 attending, allowing activists to discuss the issues around the dispute.

Organisational problems aside, the action has sent a clear message to management that we are not prepared to accept such harsh conditions. No one can avoid being ill from time to time.

When working conditions have clearly contributed to absence rates, it is doubly shameful for HMRC to impose a policy like the one described above in such an opportunistic manner.

We are now refusing to work overtime, use private vehicles for work purposes and are not cutting any corners in our duties. We have taken a firm stand and now need to build on this in the struggles ahead.

A Yorkshire PCS member in HMRC 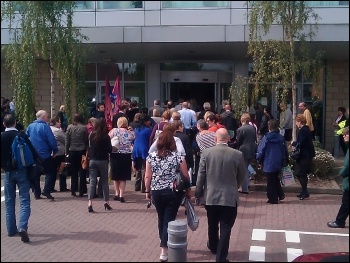 Workers at the Revenue and Customs office in Coventry took action for a second consecutive day on 8th June against the introduction of a harsh sickness policy.

Members of the Public and Commercial Services Union (PCS) mounted picket lines until 10am, when over 100 workers gathered to walk in and log in together to cause maximum disruption to the system.

Workers at the site and across the country walked out again at 11.30am till 1.30pm, demonstrating to management the determination of members to fight any and all attacks on terms and conditions.

Every attack must be fought. Public sector workers, along with workers in the private sector, are being hit from all angles.

We must stand together. If we do this, then we have a chance of winning. 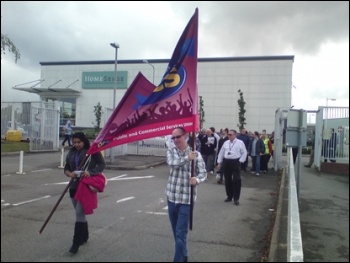 "They're getting ready to sack workers on the cheap", remarked one picket at Llanishen tax office in Cardiff as PCS members took strike action on 7th and 8th June.

Management are trying to force through changes to the sickness absence policy, seen by staff as being in preparation for cutting jobs without paying redundancy entitlements.

"They say you're entitled to have time off work if you're ill, but if you do they sack you!" said John, a PCS member who has just begun work at the site.

"The worst thing is, they're cutting jobs here while there's huge amounts of tax going uncollected. Of the £120 billion uncollected and evaded they're not even looking for £30 billion of it - it's parked indefinitely and will probably never come in".

The plans would mean that three periods of absence or five days absence in total would mean procedures would begin which could eventually lead to dismissal.

One rep remarked that a worker could fall ill, be forced to take time off work and be sacked before doctors even have enough time to diagnose a serious illness.

Members were angry at yet another cynical attack by management but they were also upbeat now that collective action was being taken. Members marched back into the office behind the PCS branch banner but the action doesn't end there.

Many expressed their willingness to come out for longer than the couple of hours taken over two days in the current action and there was a real sense of anticipation in looking forward to the national strike action on 30th June.

PCS is planning a protest march through the centre of town after picketing duties are done.

This version of this article was first posted on the Socialist Party website on 9 June 2011 and may vary slightly from the version subsequently printed in The Socialist.

This version of this article was first posted on the Socialist Party website on 9 June 2011 and may vary slightly from the version subsequently printed in The Socialist.