From The Socialist newspaper, 3 August 2011 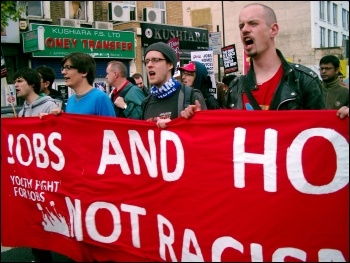 The terrible mass killings carried out by far right activist Anders Breivik have horrified the world. In Norway itself - a country of less than five million people - more than 250,000 took to the streets of Oslo to express their outrage, with smaller demonstrations taking place in every town across the country.

This was one of the biggest terrorist attacks in European history. The massive bomb in Oslo, which killed seven, was a deliberate 'diversionary' tactic to allow the killer time to carry out the cold-blooded murder of 85 participants in the Norwegian Labour Party's youth camp.

In the hours after the killings took place most of the world's capitalist media suggested it was al-Qa'ida, or some other brand of right wing political Islam, which was responsible for the atrocity. Once it became clear that the killer was a far right political Christian, much of the capitalist media have followed the line of the killer's lawyer, that Breivik is "insane".

Whatever Breivik's psychological state, it is clear from the 1,500 page screed that he emailed to far right activists before he went on his killing spree that he had developed his ideas as an activist in far right politics. Breivik had a history of membership of, or support for, a series of far right organisations. Until recently he had been involved in Norway's far right populist Progress Party. He has also claimed to be inspired by the English Defence League (EDL) and the Dutch racist politician Geert Wilders.

Hatred for Islam, along with what he calls 'cultural Marxism', is central to his 'ideology'. In reality, his ideas and outlook are a mirror image of al-Qa'ida's, not least his hatred of Marxism and of the left, but also in his looking back to a mythical feudal society, in his case via his claim to be a continuation of the Knights Templar (Christian aristocrats central to the invasion and occupation of Jerusalem in the 12th and 13th centuries).

He even mirrored the 9/11 bombers in his declaration that he did not have relationships with woman, in order to concentrate on his cause, but, similarly to them, had put €2,000 aside to pay for a prostitute before his killing spree.

It is no surprise that there is an attempt to avoid discussing what social forces created Breivik by branding him as mentally ill. Breivik is a product of 21st century capitalism. Almost a decade ago, US imperialism, backed by British imperialism, used the appalling 9/11 terrorist attack as a justification to invade Afghanistan and especially Iraq. Inevitably, the deluge of propaganda defending these occupations has increased racism, most sharply against Muslims.

This has been one factor in the growth in electoral support of far right, racist parties in a number of countries across Europe. In Norway the racist Progress Party won more than one-fifth of the national vote in the latest parliamentary election, in 2009. In a horrible irony its 2005 election campaign poster showed a dark-skinned man holding a gun, with the slogan "the perpetrator is of foreign origin".

Norway is not alone - in Sweden the far right Sweden Democrats entered parliament for the first time in the last general election, while Denmark's Folkparty, which recently ran a racist campaign under the slogan "Give us Denmark back," secured 14% of the vote in a 2007 election and has since been a influential coalition partner in government. In France the leader of the far right National Front is on 19% in polls for the presidential elections, while the Freedom Party in Austria is at a new electoral high.

These parties have all whipped up racism and nationalism, helping to create the conditions in which small grouplets or individuals turn to reactionary violence. Where these parties gain an electoral base all workers suffer as a result, but particularly those from ethnic and national minorities, as the vicious anti-immigrant policies of Berlusconi's government in Italy show all too clearly.

However, dangerous as this is, this does not represent fascism coming to power, the conditions for which do not exist. While the working class has suffered setbacks, it has not undergone a fundamental defeat resulting in its atomisation.

The far right parties today have emerged as electoral phenomena, not as paramilitary forces on the lines of the fascist militias of Hitler and Mussolini. Very often these parties have been able to make electoral gains by winning protest votes from sections of workers, who, in the absence of any mass political voice for the working class, are looking for a means to express their anger, which has been enormously intensified by the economic crisis.

It is not a coincidence that across Europe these parties have made their biggest electoral gains in areas which were previously strongholds for Social Democratic or Labour Parties. The transformation of these parties - including the Norwegian Labour Party - into parties of big business has left an enormous vacuum which far right forces are attempting to take advantage of.

Whatever its limits, the electoral growth of far right forces has inevitably given confidence to far right violent grouplets or thugs, of which Breivik is the ultimate example. This does not mean, unfortunately, that the electoral undermining of the far right - which is a likely consequence in Norway, at least in the short term, of the popular outrage at the killings - will necessarily lead to a disappearance of perpetrators of far right violence.

On the contrary, the growth of the EDL in Britain is in part a consequence of the electoral setbacks suffered by the far right BNP, which has led to a section of the BNP giving up on 'respectable' politics and returning to street fighting.

The danger the EDL or other similar forces could potentially represent in the future is also shown by its attitude to the Norway killings. While two official EDL statements condemn them, in reality its response has been more equivocal.

For example, the EDL's leader, Stephen Lennon, himself convicted last week of leading a fight at a football match, declared: "I know how incensed people are at the threat of Islam. This is not a threat but in five to ten years we will have English lads blowing themselves up."

The EDL has been able to win some angry working class support, particularly on the question of unemployment. Over the last two years EDL demonstrations have attempted to intimidate and sometimes physically attack Asian communities and also, on a small number of occasions trade union and socialist meetings.

At this stage big business sees the far right thugs as an irritating nuisance. However, in a period of heightened class struggle they can be prepared to make use of them as auxiliary forces against the workers' movement.

In London recently the railway workers' union, the RMT, has taken an initiative to begin to organise trade union stewarding of socialist and anti-fascist events, in order to protect them from the thugs of the EDL. It is very important that this is developed on a national and cross-union basis over the next period.

Capitalist governments across Europe have, to one degree or another, generated racism and anti-immigrant feeling in order to divert attention from the catastrophic cuts in workers' living standards resulting from their policies and the crisis of their system. Cameron's 5 February statement speech against 'multiculturalism', on a day when the EDL marched, was a clear example of this.

Even when the establishment politicians try to cut across the far right their strategy for doing so is to steal the far right's clothes, thereby only increasing their confidence. New Labour repeatedly did this when it was in power, leading to the leader of the BNP, Nick Griffin, calling one Labour home secretary David Blunkett, "the BNP's best recruitment sergeant".

The development of genuine mass workers' parties - that can unite all sections of the working class in a common struggle against racism and in defence of all workers' interests - will be the most powerful weapon in the battle to politically defeat the far right.

Keep the EDL out of Tower Hamlets

No to racist division: Unite to defend jobs and services

The English Defence League (EDL) plans to march through Tower Hamlets in East London on 3 September. EDL 'boot boys' plan to sow racial division, particularly against Muslims, in an area where they have little or no support.

This clear provocation, in a borough that has seen off attempts by far right and neo-Nazi groups in the past, follows on last year's threat to protest in the borough. The EDL withdrew its threat to march mainly due to mass opposition. But 5,000 mainly local youth and trade unionists still demonstrated to show the EDL is not welcome in the borough.

It is the local community including trade unionists and socialists who have defeated far right, racist groups every time.

UNITE AGAINST ALL CUTS

Building a workers' political alternative to the establishment parties

Waltham Forest: a victory for unity

NHS cuts from a nurse's viewpoint

Spain:"Throwing a shoe at the system"

The great PFI schools rip off - once again!