Link to this page: https://www.socialistparty.org.uk/articles/12603 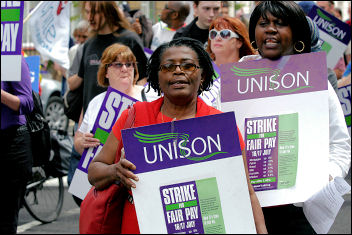 Bosses at Plymouth City Council (PCC) have de-recognised Unison. Unison and the local trade unions have struck back.

A 70-strong Unison members' meeting, with one abstention, unanimously backed the call for a strike ballot should the council stick to its position. De-recognition is the culmination of a six-month-long negotiation process caused by the government's cuts agenda.

Plymouth City Council said it needed to save £18 million over three years. This meant cuts in holiday entitlement, enhanced payments for working outside the core week being ended, maternity and paternity entitlements being slashed, redundancy payments halved and mileage rates reduced.

Management has ruthlessly sought to divide and rule, using the council's internal internet to spread fear and insecurity and issue dire threats if members voted no to the proposed changes.

In these circumstances Unison, which represents 1,600 council workers and is the largest union at the council, voted by 299-244 - 17% of the membership - to accept, while GMB and Unite members voted no.

When the council gave back the two days holiday entitlement, GMB and Unite members re-balloted and accepted the cuts but UNISON, acting on legal advice, refused to sign this rotten deal.

Management said that meant 300 redundancy notices would be issued but then decided to de-recognise Unison and impose the deal. Now GMB and Unite have withdrawn from the deal.

In de-recognising Unison, this vicious management has thrown down the gauntlet to the whole trade union movement. The week-long campaign to force the Tory-led council to back down has already drawn support from New York trade unionists and from Europe.

Now begins an urgent campaign to win hearts and minds among Plymouth Unison members. The union needs to urgently begin building for an industrial action ballot of all council workers.

The support of GMB and Unite will also be crucial. The aggressive and malicious actions of PCC have given local authority trade unions in Plymouth a chance for renewal.

If we're going to turn this to our advantage we're going to have to recognise that the three trade unions made a strategic mistake in entering negotiations designed for nothing else than reducing terms and conditions.

Local government trade unions in Plymouth should have come up with a united response, stating clearly that we do not accept that working people have to pay the bill for the crimes of the bankers and their politicians and therefore are not going to negotiate on that basis.

Talking on management's terms was tacit acceptance of the cuts agenda and enabled the council to play its divide-and-rule game. All that has happened demonstrates the correctness of the call for no cuts to any public services or to the terms and conditions and pensions and pay of those who provide them.

The call for industrial action in defence of our right to be in a trade union is vital, but should be linked to:

This version of this article was first posted on the Socialist Party website on 24 August 2011 and may vary slightly from the version subsequently printed in The Socialist.