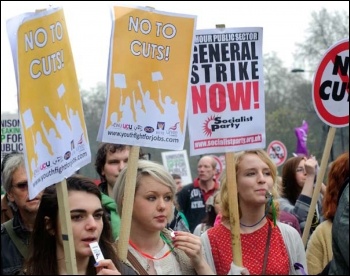 The trickle of cuts and sackings in the public sector has turned into a flood and the mood in my workplace has become one of frustration, worry and anger.

Anger at what? "Oh, it's just everything," said a school caretaker at a branch committee of Unison in Waltham Forest recently. We were trying to stick to the item on the agenda, (the lack of a pay offer by the employer) but people kept interrupting to speak on other problems. Pensions, redundancies, cuts to our sick leave entitlement, cuts to our annual leave, cuts to our unsociable hours payments... the list goes on and on.

Trying to stick to the one thing that is making people angry has become increasingly difficult. That is why it is precisely the right time for the TUC to summon its support (which is over six million strong) and give that anger a focus and a direction, namely to generalise the issues and stop the government's austerity programme.

Last year a mini-bus of trade unionists from our area travelled up to the National Shop Stewards Network (NSSN) lobby of the TUC in Manchester. Then the NSSN demanded a national demo against cuts, as a first step. The giant demonstration on 26 March of over half a million was vindication to all of us who participated in that lobby.

The 26 March protest showed the strength of feeling of opposition to this government and their cuts agenda but we can all say it simply was not enough. Since 26 March the establishment has been rocked by scandals and crisis, there have been plenty of opportunities for the TUC to step forward and give a lead.

After 26 March, a feeling ranging from despair to frustration and anger could almost be tasted in the air.

On 30 June, Unison members looked on enviously as 750,000 teachers and civil service workers took strike action against attacks on pensions.

I think it was only Newsnight presenters and the blinkered rich who were surprised by the explosion of anger on the streets in August. Anyone who works in the public sector or lives in a poor area could have told you that frustration at deteriorating conditions was rising.

We are asking for the TUC to call a 24-hour public sector strike against the cuts. This would put the TUC in the frame as a major progressive force in society.

All those young people who don't even know that it exists could make the link between their generalised outrage and our fury at this rotten and unfair system. It would channel the anger, raise the spirits and unify all the small and large issues bubbling away in our workplaces and our communities. That's why this year, like last year I'll be going on the lobby on 11 September.

I urge all those people who are fighting and campaigning to come too. Right now there is anger about 'everything' and we need 'everyone' to get involved.

Lobby the TUC on 11 September

For details of transport to the lobby from your area:

All other regions email info@shopstewards.net