Editorial of the Socialist, issue 683 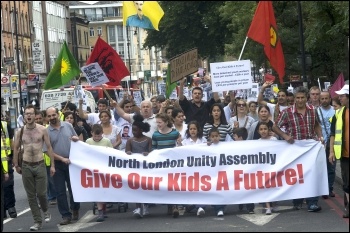 David Cameron and his government have resorted to the traditional Tory stance of the mailed fist in the aftermath of the riots.

Yet even the Thatcher government - following similar upheavals in Liverpool in 1981 - initially dispatched Tory minister Michael Heseltine on a damage limitation exercise to the city. He promised jobs and improved services, although the inhabitants of Liverpool 8 - the scene of the riots - and the poor and working class in the rest of the city saw no improvements, only further deterioration. The only gainers were the dogs, through the planting of hundreds and thousands of trees!

The Scarman inquiry followed similar events in Brixton and blamed the social conditions and racism for the riots. It suggested measures to ameliorate the situation. Reflecting the completely changed situation - the economic and social situation is now much worse - Cameron today has moved in the opposite direction.

Fresh from another holiday - he has had more holidays than Thomas Cook - a raft of repressive measures has been suggested. Cameron's immediate reaction was to sanction the use of rubber and plastic bullets, as well as water cannon, in future confrontations. Hugh Orde, a past police chief in Northern Ireland, dismissed this out of hand; it did not solve but enormously aggravated the situation there.

Curfews have been proposed, Twitter and social networks have been threatened with censorship. Yet even the Home Secretary, Theresa May, seems to realise that such steps are difficult, if not impossible, to implement in a modern 'democratic' society. Parents have been encouraged, Stasi-like, to inform on their children.

But let no one, particularly the labour movement, be under any illusion - if it can get away with it, this government will try to use the riots to add to the panoply of anti-democratic, semi-dictatorial measures already in place. Many of them were sanctioned by Tony Blair's Labour government when it was in power.

The vicious anti-trade union laws - the most undemocratic in the advanced industrial countries - which were left virtually untouched by both Tory and Labour governments conclusively demonstrate this. There is now an attempt to infringe the right to demonstrate, as shown by Camden council demanding payment from the National Shop Stewards Network for marching to the TUC on Sunday 11 September.

Accompanying these attacks, in London and elsewhere, are councils preventing posters and leaflets being distributed for meetings, some in opposition to the cuts. This has been done on spurious 'environmental' grounds! Even those who advertise on the occasional tree for the return of their lost pets are threatened with prosecution!

This is effectively political censorship by those in power in the councils - Tory, Labour and their Liberal sidekicks. It will not succeed. A 'free speech' defiance movement by the labour movement here - as in the US in the earlier part of the 20th century and the civil rights movement in the 1960s, as well as in South Africa under the apartheid regime - will be necessary unless the 'authorities' relent.

There has been much outrage following the riots, correctly so, at the damage and loss of life, particularly of the tragic deaths including the three young men in Birmingham and an older man in Ealing. There is public hostility to the nihilistic violence directed not just against big shops but also at small shopkeepers and entirely innocent people who were burnt out of their homes.

Cameron and his government are seizing on this to shift the political pendulum to the right. And he has met with a certain success because of the sense of insecurity - particularly by those in the areas which interfaced and experienced riots, as well as with the wider public, the working class included. There was fear and distaste at the scenes of what appeared to be mindless violence, particularly when it was inflicted on those in the same communities as the rioters.

However, the attempts of Cameron to blame the riots on 'sheer criminality' will not wash. No mention now of the 'criminality' of education minister, Michael Gove - among many Tory and Labour MPs who 'stole' £7,000 from the taxpayer for office furniture. With other MPs, he was forced to pay this back. Also Cameron was forced to hand back 'expenses' - but there was no prison sentence for either of them.

Nor will the refrain, 'this has nothing to do with the cuts, it is not political', stand up to serious examination. While there are a number of social causes - family background, influence of peers with the young, etc - nobody is born a criminal. Economic and social conditions ultimately are the cause of most criminality. Mere repression, including the warehousing in prisons of mostly poor people, as in the US where 2.3 million are incarcerated at the present time, will not solve this age-old problem.

Yet Cameron wishes to repeat this here by stuffing the prisons to bursting point. In the long term, this will provoke 'riots' in prisons to match those that will surely be repeated again and again in Britain and elsewhere so long as this grossly unequal, brutal, class-riven capitalist society continues.

And most of the factors which led to the riots - which were predictable and were predicted by the Socialist - are rooted in the worsening economic and social situation, and the sense of powerlessness this engenders.

Tory ministers in the immediate aftermath of the riots launched a barrage to prevent anybody drawing this conclusion. In vain! The Guardian, for instance, under the heading 'Cuts and Riots: They're Linked', published the results of long-term study of the origins of riots. This concluded: "We analysed unrest in 28 European countries from 1919 to 2009 and eleven Latin American countries since 1937. What we found is a clear and positive statistical association between expenditure cuts and the level of unrest."

The same journal followed this up in a report of court proceedings against rioters: "Young, poor and unemployed: the true face of England's rioters". The Socialist Party's demand for investment in a massive programme of socially useful job creation must be raised at every opportunity.

How can Cameron pretend that the cuts were not one of the causes, if not the major cause, of the riots when in Tottenham of the 13 youth centres eight were closed down on the eve of the riots? They must be re-opened immediately. Youth workers in his own constituency went on strike for one day in protest at the savage cuts in youth services. Therefore the attempted pre-emptive strike of Cameron and his government to seek one explanation - criminality or 120,000 alleged 'dysfunctional' families being responsible - will not succeed.

The most striking aspect of what the capitalist press themselves have dubbed 'Black August' is the way the riots were played out against the backdrop - almost like a split level TV screen - of the deepening crisis of capitalism.

This has prompted even firm pillars of the right, such as Charles Moore of the Telegraph and Peter Oborne, to question capitalism itself. Moore mused: "maybe the left were right", while Oborne attacked the "feral rich".

The riots of the 1980s were a prelude to the organised, determined working class resistance in Liverpool between 1983 and 1987 and the heroic miners' strike of 1984-85. The labour movement has been weakened since then with the shift towards at the right top of the Labour Party which subsequently destroyed it as a mass working class force. Many trade unions underwent a similar process at the top but still remain viable organisations of the working class which will shift towards the left in the next period.

Workers and socialists must prepare for this period by energetically combating Cameron's attempt to capitalise on the riots to introduce further draconian anti-working class measures. History is littered with examples of where measures are taken, allegedly against 'lawbreakers' and even 'rioters', and then legislation is introduced which is used against workers in struggle. The banning of all activity for one month in five London boroughs because of the threat of the far-right English Defence League (EDL) in Tower Hamlets is an example of this.

Why should legitimate, democratic and socialist forces be prevented from demonstrating - including against cuts and other measures of the government - because a handful of the far-right attempts to whip up race hatred in the hope of inter-communal violence, which will divert attention from the real culprits, capitalism and those who defend it?

The marvellous intervention of the father of one of the boys killed in Birmingham which resulted in a 'multicultural' mobilisation of defiance against all those who wish to split the working class is an example of what is possible. Unfortunately, the labour movement did not act under its own banner in this situation. But this showed the potential for fighting against all attempts to divide the working class.

The labour movement must also come to the defence of those unjustly imprisoned, whose sentences do not fit the alleged crime. We must oppose the brutal attempt to withdraw benefits and evict from their homes those convicted and their families. This will only lead to a further cycle of crime and violence. But at the same time we must fight for a new society, democratic socialism, which will eliminate the conditions which led to the upheavals in August.

See www.socialistparty.org.uk for further articles and the Socialist Party's demands

Chesterfield Socialist Party: Race riots in the US 50 years ago