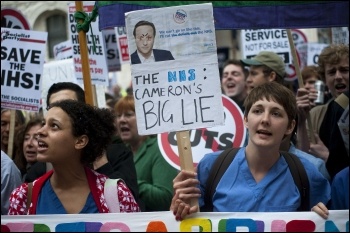 On Wednesday 7 September, Tory health minister Lansley's Health and Social Care Bill reaches its report stage and third reading in parliament. This bill is intended to be the next step in destroying the national health service (NHS) won by the struggles of working class people.

The bill takes away the government's 'duty of care', so there will be no legal obligation for it to provide a health service. Health workers and service users fear that the bill will replace the comprehensive universal system of health care with a fragmented US-style health market, an unequal postcode lottery with limited state-provided service for you and me and more for those with plenty of cash.

Building on the pro-privatisation measures of recent Labour governments, the bill gives the private sector priority to cherry-pick the areas they work in to maximise their profits. Patients could end up being asked to pay top-up fees for anything above the absolute basic services.

Private companies will even be allowed to take the new NHS commissioning groups to court if they fail to win contracts, leading to more NHS money being wasted in legal wrangles!

And NHS services and staffing are already being cut under the Con-Dems' austerity measures. Tory 'efficiency savings' of up to 37% are expected over the next few years with tens of thousands of NHS jobs on the line.

NHS workers and patients cannot let this happen. There will be protests at Westminster on 7 September but this should be part of a wider movement.

Working class struggles won the NHS - more working class battles are needed to save it - and to resist all the attacks on public services. We need united action to defend the NHS, with organised trade union action at its centre, supported by anti-cuts campaigns and service users.

Fight these attacks and rebuild the NHS: