From The Socialist newspaper, 2 November 2011 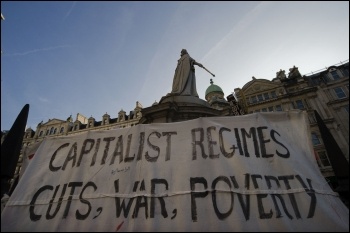 Anti-capitalist protest outside St Pauls in London following the Wall Street protests - We are the 99%, photo Paul Mattsson   (Click to enlarge)

Following Occupy London Stock Exchange (LSX), and similar protests in Glasgow, Nottingham, Bristol and Newcastle, among others, a group has established Occupy Bradford outside the city hall on Centenary Square.

One supporter of the camp had been to Occupy Wall Street in the US. Several people brought donations of food. One person turned up to argue with the occupiers but went away supportive, saying he would come back to discuss further the following day!

I left leaflets advertising the 5 November Jarrow demo in London (see pages 5 and 12), which was amongst a number of other events they discussed supporting and sending people along to.

But more than anything, the campers want to discuss with people how to break the monopoly of the top 1% over political and financial decision making and create a society that would benefit the 99%.

An Occupy LSX camper spoke to the Socialist about the threat by St Paul's Cathedral and the City of London Corporation to evict the occupation. 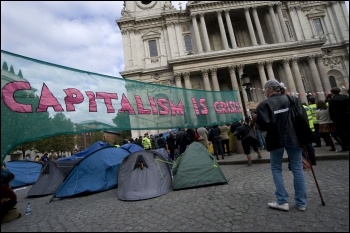 Anti-capitalist protest outside St Pauls in London following the Wall Street protests - We are the 99%, photo Paul Mattsson   (Click to enlarge)

"The protesters have been cooperating with the cathedral managers; the crisis among them is of their own making, they know they will be seen in a very bad light if they help with eviction orders.

The City of London Corporation has led the way in seeking to evict us and has applied pressure on the cathedral, but the Corporation may now have to go it alone.

We are still defiant and determined to continue, and have now occupied a third site - Northampton Square. We need to make sure that the publicity over the problems of St Pauls doesn't prevent our anti-capitalist message getting out. Despite the wide range of differing political views at the camp, the 'Capitalism is Crisis' banner raised at the start of the occupation encompasses very many voices here.

The outreach working group needs to continue its work making strong links with the student unions, unions and anti-cuts organisations and we need to democratically debate our demands to move back to other crucial issues like capital finance and its effects on the 99%.

We urge new supporters to come and join us - everybody is welcome. We are in the 'belly of the beast' here, and every extra person will help with our impact."

Workers can show their power in 30 November strike

An interview with Mick Dooley

'Virgin' on the outrageous

Read the Socialist - the paper that fights all the cuts

Liverpool council 'does its best' for the bankers