Capitalism is a failed system: support the socialist fightback 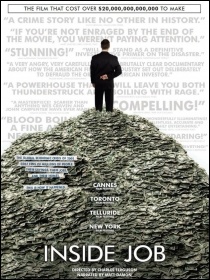 Inside Job: film on the global economic crisis of 2008   (Click to enlarge)

"The supremacy of finance capital over all other forms of capital means the predominance of the rentier and of the financial oligarchy," wrote revolutionary leader Lenin in 1916 in Imperialism - the Highest Stage of Capitalism.

Inside Job (Storyville, BBC 4), Charles Ferguson's film about the causes of the global financial crisis in 2008, showed the consequences of that supremacy borne out in monstrous form. Ferguson shows how 'financial oligarchy' brought the world economy 24 hours away from collapse.

This was only prevented at a cost of $20 trillion, yet all the main players in the crisis walked away with their millions and billions intact. Some, like Larry Summers, Ben Bernanke and Tim Geithner, remain in key positions in the Obama administration and the US Federal Reserve.

When Ronald Reagan was elected US president in 1980, he removed financial safeguards put in place following the 1929 Wall Street Crash. This resulted in the failure of hundreds of local banks at a cost of $124 billion and the dotcom crash in 2001 with $5 trillion in investment losses.

Yet the regulation agencies did nothing. There were 3,000 finance industry lobbyists, five for every US congressman, on Capitol Hill.

There then followed "the biggest financial bubble in history" as sub-prime mortgage debts were bundled up into complex financial instruments. Ratings agencies - that now call on governments to make drastic cuts to our living standards - were paid to give top AAA ratings to these investments. Their profits alone quadrupled between 2000 and 2007.

The bankers raked in billions while dismissing the IMF chief economist's warning in 2007 that the investments were unsustainable.

Bankers moved seamlessly between Wall Street and the government. For example, Hank Paulson, earning $31 million a year as CEO of Goldman Sachs when they were heavily involved in the sub-prime market, became US treasury secretary in 2006.

When the insurance company AIG became bankrupt, Paulson forced them to pay their government-backed debts in full. $61 billion was paid out to the big investment banks, including $14 billion to Goldman Sachs!

We pay the price

Meanwhile the working class and poor paid the price - workers' pension funds were bankrupted by the collapse.

The 'Great Recession' that followed the sub-prime crisis led to the loss of 30 million jobs worldwide, 10% unemployment in the US and Europe, six million foreclosures (house repossessions) in the US alone, with another nine million in the pipeline, and the springing up of tent cities across the country.

Ferguson concludes at the end of the film: "the men and institutions that caused the crisis are still in power and that needs to change". He goes on to say that it won't be easy, "but some things are worth fighting for".

Inside Job gives compelling evidence for what Lenin said, that under capitalism the rich run society in their own interests and are incapable of taking society forward.

Lenin's conclusion was the need for the working class and poor to transform society - to establish socialism to enable the overwhelming majority to democratically plan the use of all the vast wealth and resources in the world for the benefit of everyone. That is what the Socialist Party is fighting for and why it appeals for your support.

Can you make a donation? The Socialist Party has no big business backers, and depends on the financial contributions of its members and supporters. Please see the form below, go to www.socialistparty.org.uk/donate or phone 020 8988 8777.