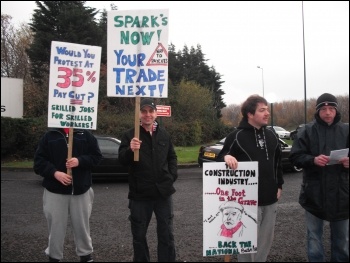 The construction workers' strike on 14 December could be the biggest strike in the construction industry for almost 40 years. The electricians fighting to defend their national agreement (JIB) will be taking action alongside the other trades in the NAECI 'Blue Book' agreement fighting a pay freeze. It's the same message, big construction companies with £ billions in their order books, making £ millions in profit screwing their employees to get even more profit and hiding behind this government, their anti-union laws as well as EU law that enshrines the 'race to the bottom'.

But despite all this, construction workers are fighting back and the NAECI workers are taking a leaf out of the electricians' book with their second 'day of action'.

The biggest of the 'Dirty 7' big contractors, Balfour Beatty (BBES), may have outlawed the strike by their electricians but 7 December (D7) saw protests, stoppages and walkouts all over the country. 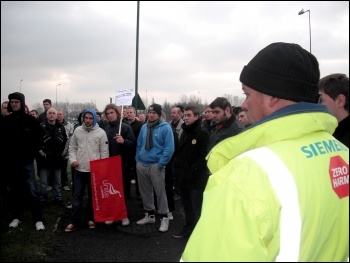 Electrician Alan Keays commented after D7: "The day's events show the enormous power and potential of the rank and file when they pull together. This dispute may go on for many months yet as the rogue 7 dig their heels in. We must continue the weekly protests and maintain the numbers, and push Unite to make it an official strike in construction in the new year. Whatever happens the rank and file have transformed the construction sector of Unite in the last four months."

Unite's strike was won by an 81% margin yet the bosses can run to the courts and use the Tory anti-union laws to stop a just and legitimate strike. Yet it's perfectly legal for them to impose new Besna contracts on electricians which will result in them losing up to 35% in pay.

There's supposed to be talks at Acas between Unite and the 'Dirty 7' on 15 December. This shows that the stoppages are having an effect and the potential for a total victory. But any talks have to be transparent and in front of the members.

If it's true that Unite called off the official strike last week only because of the threat of an injunction, they should have gone ahead with it and at least called Balfour's bluff. However, they are re-balloting, and we hope that the new vote is an even bigger one and across all the companies and also links many official or unofficial strikes with the NAECI workers.

But the walkouts on 7 December showed that we can't and won't wait to jump through the legal hoops. D7 also saw many public sector workers and young people joining the protests. This is crucial as the government and the Tory press try to split private sector workers from those in the public sector who went on strike on N30 to defend their pensions.

Workers in Unilever have been on strike to defend their pensions. Car companies Ford and BMW are trying to close their pension schemes to new starters. Workers at the building company Cemex are balloting for action over pensions.

The Socialist Party and the National Shop Stewards Network is calling on the TUC to support Unison in Scotland's motion naming 25 January as the date for the next public sector general strike as a follow-up to N30.