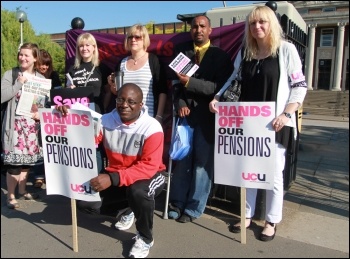 Two years ago, University and College Union (UCU) honorary treasurer Alan Carr promised conference that UCU would deliver "the fight of our lives" if the government, whether Labour or Tory, attacked lecturers' pensions.

After a special conference on 31 January to review the Universities Superannuation Scheme dispute in the pre-1992 university sector, we now know UCU's leadership feels the "the fight of our lives" to consist of three days of strike action and four months of action short of a strike. The conference narrowly endorsed the leadership's recommendation to suspend industrial action for the old universities pensions dispute.

Fortunately, the union has taken a more determined position regarding its dispute over pensions in the new universities and FE colleges.

Delegates were astonished to learn that a hotly-debated proposal from UCU's leadership to suspend the union's dispute with the pre-1992 university employers was "a typo".

Many UCU branches openly challenged the way proposals had been ordered and debated, with one delegate being shouted down as "infantile" by the conference's chair. Delegates were never given a chance for a simple yes-or-no vote on whether to continue action, nor on whether to continue coordinating action with members of the TPS pension scheme in FE colleges and new universities.

In those colleges and post-1992 universities, meanwhile, the mood is absolutely clear. Over the objections of UCU general secretary Sally Hunt, branch after branch has passed motions calling for further strike action over the Teachers' Pensions Scheme, coordinated with other public sector unions.

Hunt, who has consistently opposed strike action in the pensions dispute, has faced a stark rebuke in the FE sector from Bridgend College, who passed a motion accusing her of "misleading" members and "undermining" the democratically-elected national executive.

Voting in the UCU election opened on 6 February. Socialist Party members are supporting UCU Left candidates, including Mark Campbell for general secretary and Angie McConnell for vice president. More details on the campaign will follow in the Socialist.