From The Socialist newspaper, 22 February 2012 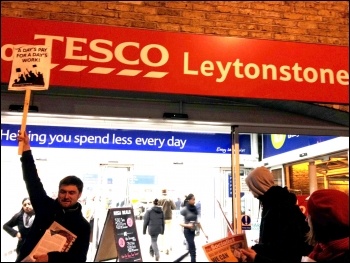 As unemployment rises the vultures are circling. Among the biggest is Tesco. But they met huge opposition when they advertised a full-time, permanent position for which you would receive a meagre dole payment plus expenses - all part of the Con-Dems' slave labour Work Programme.

We've already bailed out the banks to the tune of billions. Now massive corporations are being subsidised by the state to take on unpaid workers. The government gets to pretend to be helping unemployed people 'get experience' and big business gets work done on the mega-cheap.

Everyone's a winner - apart from the people on the schemes, the taxpayers who fund them and the current workforce who fear redundancy. After all, why would multibillion-pound corporations pay for what they can get for free?

For those who are forced into these placements, the future is a bleak one of working poverty. But a fightback has begun.

There have been workfare protests at Tesco stores up and down the country calling on them to pull out of the scheme. This has already had an effect with Tesco announcing that it will offer paid placements and guaranteed jobs for all those who complete the scheme at its stores. 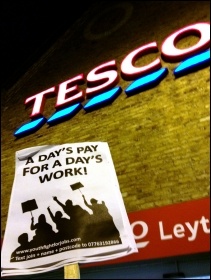 And others have taken note too. TK Maxx, Waterstones, Matalan and Sainsbury's and others have pulled out of the scheme. This represents a small victory for the unemployed and working class against attempts to drive down our rights and living standards.

We need to carry on campaigning and consign the whole workfare scheme to the dustbin of history.

Tory millionaire ministers attack campaigners against their slave labour schemes as 'job snobs'. But the point is - these are not jobs!

We need to build a movement that links the unemployed, students and trade unions to fight for real jobs.

The anti-workfare campaign that has sprung up will give confidence to many. We need to press home the advantage, forcing those companies still taking part in the workfare schemes - including Tesco, Asda, McDonalds, Primark and Topshop - to withdraw.

Without these big names, workfare could become unworkable. Though the government won't stop there. We need to keep the pressure on. 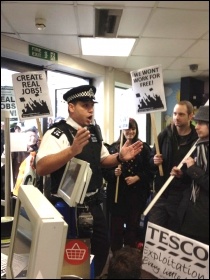 Youth Fight for Jobs joined protestors at Westminster Tesco against workfare and occupied it for an hour until thrown out by the police,18 February 2012, photo Suzanne Beishon   (Click to enlarge)

Public sector workers are being made redundant in their hundreds of thousands. Local councils are looking for 'volunteers' to run public services such as libraries. The community action programme will see people sent out to do jobs like litter picking or cleaning graffiti off walls. These jobs are supposed to be done by properly trained public sector workers who get a wage, a pension and other workers' rights.

The government is using unemployment to undercut the pay, terms and conditions of those in work. The working class is now threatened with a race to the bottom.

With 2.67 million unemployed facing being forced to work for benefits, big business now has no motivation to take on people on real wages and is in fact more likely to lay people off in order to make for the cheaper option.

Workfare could also act as a way of frightening workers out of action to demand decent conditions as they will know that there is a cheap, easy alternative for the bosses in the form of workfare.

Youth Fight for Jobs totally rejects the race to the bottom. We face these attacks on our rights and living standards because we live in a society that is geared to making the maximum profit for a tiny minority of very wealthy people.

In order to achieve a society that can provide a decent job and good living standards for all we need to bring an end to this system. We need a society that provides jobs for the 99%, not just profits for the 1%.

Youth Fight for Jobs calls for:

Join the fortnight of action against workfare - protests around the country

Get in touch for details of what's happening near you:

Private and voluntary sector providers compete for contracts to place the long-term unemployed in work - the biggest is A4E. Contractors are paid a fee, usually £400, when the job centre refers an unemployed person to them and more money if the person stays in a job for two years.

About 20% of unemployed people who have been on the Work Programme for at least six months have been found a job - compared to the target of 40%.

People do up to eight weeks of unpaid labour. They can refuse to take part or pull out during the first seven days, but after that it is compulsory and benefits can be withdrawn for non-participation. 34,200 took part between May and November last year.

People are forced to work 30 hours a week doing work "of benefit to the community" or risk losing their JSA. 24,010 took part between May and November last year.

Long-term unemployed people are forced to work unpaid under the same conditions for up to six months.

Employers are 'urged' to offer work experience placement or guaranteed job interviews. Supposedly to help 50,000 mainly young unemployed people but from January to November 2011 only 3,470 had taken part. This was the scheme which Cait Reilly took part in and is challenging the government in court over - she was never invited to the 'guaranteed' interview.