From The Socialist newspaper, 7 March 2012

On 28 March: Strike back against the Con-Dems

Strike back against the con-dems

We have the strength to defeat the coalition's multi-billion pound pensions robbery; just look at recent victories achieved with much smaller forces than the alliance of trade unions who are preparing strike action on 28 March.

Trade unionists are among the many people angry at the blatant use of 'workfare' by big business to coerce the jobless into unpaid labour instead of properly paid work and genuine training. Yet the protests over the last few weeks have forced company after company to withdraw, leaving the government scheme in tatters.

Youth Fight for Jobs - which organised the 330 mile Jarrow to London march for jobs last year - is one of the campaign groups that have helped publicise the issue, organising protest pickets and occupations of those mega-profitable retail giants (see page 5 for more on workfare protests). 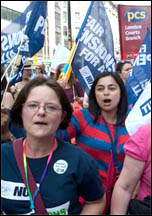 There has also been a significant trade union victory scored by construction workers after six months of protests, unofficial walkouts and a threatened strike. This defeated the attempts by the 'Dirty 7' electrical contractors to impose the Besna contract which would have cut electricians' and other skilled construction workers' wages by up to 35%.

Just think what we can do with a strike on 28 March of trade union members in NUT, UCU, PCS, EIS, SSTA, Nipsa - and more. Even the doctors' organisation - the BMA - is threatening action now!

It's no wonder - the government still wants us to pay more, work longer and get less. If these plans go through teachers, for example, will be losing a day's pay every single month in extra contributions. And if we back down from action it will give the government confidence to press ahead with all their other attacks too. But with more action we can stop them!

So let's give a loud and confident YES to continuing the campaign and YES to further strike action on 28 March and beyond!

On 28 March: Strike back against the Con-Dems

No cuts, No fees, Bring back EMA

Become Coventry deputy mayor? Thanks, but no thanks!

Revolution through Arab eyes - the Factory