14 March - Socialist Students get a response 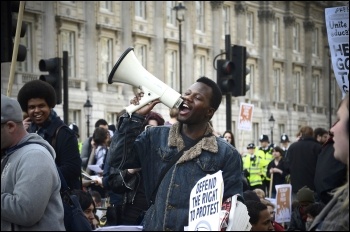 Across Britain, thousands of students took part in the 14 March protest called, but not built for, by the National Union of Students against £9,000 tuition fees, the ending of Education Maintenance Allowance student payments, privatisation and cuts.

Many of the more successful local protests were organised by Socialist Students members. In Sheffield 60 students joined protests at both Sheffield University and Hallam University, 50 were on protests in York and 40 in Brighton.

Chaz Lockett from Sheffield University Socialist Students told the Socialist: "It was a really fantastic demo which was bright and noisy. We got lots of support from members of the public and many people joined in with the demonstration.

"The next step is building the momentum from today for 28 March, when public sector workers are planning a strike over pensions. We want to give them as much support as possible, as to beat the cuts we need to link the struggles of students and workers."

Fight the cuts - for a workers' alternative

Fight back against attacks on pensions

National demo needed to save our NHS

14 March - Socialist Students get a response

Coventry: Fight for a socialist alternative

Building the Socialist Party: 'year of the branch'

Young, socialist and proud to be!

The best of 'literary fiction'