Tell the Con-Dem government: NO CUTS! 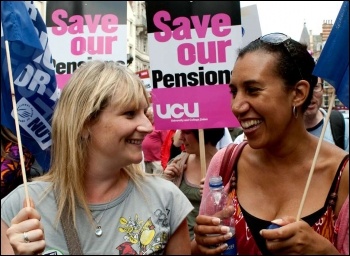 War is declared! ...or at least, the next phase in the ongoing pensions action has been called - with NUT and UCU members in the 'post 1992 universities' going on strike across London on 28 March. Now we need your urgent support!

This is because the coalition government, while planning to cut taxes for the richest and to privatise our schools and other services, again in the interests of the 1%, remains dead-set on slashing public sector pensions. They want us to work longer, pay more and then get less.

These cuts mean that some teachers are being told that their retirement age will rise to 68. The attacks will also mean all teachers face pay cuts from April 2012 as pension contributions are increased.

Teachers in London will be among the hardest hit. Contributions will rise from 2012-14 by over 50%. An experienced inner-London teacher will see their annual salary fall by £1,500 by April 2014.

Many teachers outside London - who also voted by a big majority in the consultations to support strike action on pensions - are disappointed that they haven't been given the chance to strike on 28 March too. I and others argued for national action but regrettably the majority of the NUT executive voted for a strategy of regional action starting in London.

The best way, however, of making sure NUT conference in April votes to call on-going national action next term is to help those of us in London make sure that our 28 March action is a big success!

Because of what we do, teaching the children of other workers while they work, our strike will have a big impact on London. Last summer a desperate Tory education minister Michael Gove exhorted parents to 'run' the schools for a day but parents showed huge support for the 30 June strike.

With schools, colleges and universities across the 32 London boroughs involved in strike action on 28 March a clear message will be sent to the government - public sector workers are not done with you yet!

Support the action on 28 March

Join the demo: assemble at 11am in Malet Street, London WC1E 7HY

Send messages of support and donations to NUT/UCU branches to show the whole movement is behind us. Any messages sent to [email protected] will be passed on

Tell the Con-Dem government: NO CUTS!

Build a strategy to win on pensions

Fight or privatise: A tale of two councils

Budget: far from 'all in it together'

Student walkout: Socialist Students show what could have been

Defend the right to protest!

Single and video: ill Manors by Plan B