Link to this page: https://www.socialistparty.org.uk/articles/14194 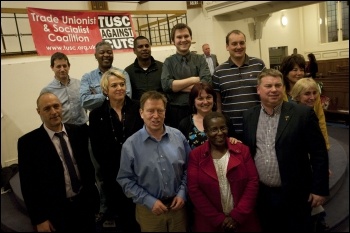 Some of the candidates on the TUSC list for the May 2012 London Assembly elections, photo Socialist Party   (Click to enlarge)

London TUSC: Standing to say "there is an alternative"

On the day of the millionaires' budget, the transport union RMT national executive made the decision to back the London Assembly election list of the Trade Unionist and Socialist Coalition (TUSC) and to allow RMT branches around the country to back TUSC candidates in the council elections in May 2012.

RMT general secretary Bob Crow made this important announcement that evening when he opened a rally to launch the TUSC list of candidates for the London-wide member list in the Greater London Assembly elections. The executive had written to every single branch in the Greater London area and not one said they shouldn't support TUSC!

Bob pointed out that while Labour leader Ed Miliband may get up and condemn the budget for the rich, "what would they do under the same circumstances? Exactly the same except over a longer period of time".

"There are good MPs in Labour" he said, such as John McDonnell and Jeremy Corbyn, "but they stand on a Labour manifesto".

Pouring scorn on Miliband's call for "responsible capitalism", he said you can't have capitalism without inequality. "A hundred and seven years ago this union moved a resolution to say we want a party of labour and to get rid of liberalism; now we have to say we need to get rid of Labour and we need a party of trade unionists and socialists".

Fire Brigades Union (FBU) general secretary Matt Wrack joined Bob Crow on the platform. The London region of the FBU officially backs TUSC and Matt has made a personal commitment of £2,000 to the campaign.

Matt underlined the devastating effects of the Con-Dem policies of rampant privatisation, attacks on welfare, and attacks on workers who make a stand.

Yet the Labour leadership condemned people for striking, and instructed MPs to abstain on the draconian Welfare Bill. "We may be small tonight but we can grow.

"Our message can get an echo - the alternative is a dire future that offers nothing to millions".

Chairing the rally, candidate Nick Wrack from TUSC's national committee said: "Austerity has its boots on".

TUSC stands as an alternative to the three-party consensus to make us pay for their crisis, because "no one speaks up for ordinary working class people".

FBU executive member for London Ian Leahair, a candidate on the list, outlined the attacks on pay and shifts and the privatisation the FBU has had to battle against. "I am not a politician.

"But the FBU in London is fully supporting TUSC. Since 2009 year on year we've been in a bitter dispute because we dared to stand up for our conditions of service... We back TUSC because it opposes all cuts and all privatisation" . 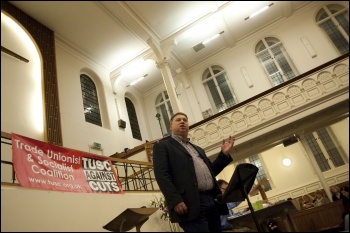 Two hundred trade unionists and socialists attended the rally. As candidate April Ashley (on public sector union Unison's national executive representing black women members, speaking in a personal capacity) said, the trade unionists on the list, and those present in the room, themselves represent thousands more who want to see the back of the Con-Dems but believe Labour no longer represents them.

She explained that the Socialist Party hopes that the serious trade union backing for this list is a stepping stone in the direction of workers forming their own party.

"What more can they take from us? Workers know about the attacks, but want to know: what do we do? New Labour councillors shrug their shoulders and follow the Tory line.

"People feel despair, but we stand to say there is an alternative" . She went on to explain: "This is a socialist banner.

There is huge wealth in society. The rich are getting richer. They are enriching themselves at our expense.

How is it that the 99% can't run society for our benefit? We stand to build confidence that we can run society, we want to change society".

Some from the impressive line up of other candidates spoke to introduce themselves. FBU member Sian Griffiths, chair of the FBU women's committee, explained: "I'm not a politician but I am political.

"Those in power will not be satisfied until they privatise everything and we work for nothing. We have no alternative but to go out and fight" .

Nancy Taaffe, a library worker made redundant, commented that Unison general secretary Dave Prentis had said: "New Labour built the bridge over which the Con-Dems crossed".

She added: "Socialist Party members were attacked for arguing we shouldn't pay for the bricks... Labour councillors dutifully trot in to council chambers to vote for cuts, saying there is no alternative - TUSC is standing to show that there is an alternative".

Lesley Woodburn said: "I am one of the growing numbers of unemployed. The gap between rich and poor is growing ever more obscene. There is no moral appeal to be made to capitalism".

Martin Powell-Davies, who represents Inner London on the National Union of Teachers executive, urged support for next Wednesday's London NUT and UCU strike and demonstration: "Thousands of teachers know they need to strike - but they don't have a clue who they can vote for in the elections"

Last weekend there was much made in the press about doctors threatening to stand in elections. In the London elections, there is already a doctor on the TUSC list.

Dr Jackie Turner explained why she is standing: "The Old Etonians may not need the NHS, the rest of us do".

"They are not an alternative. They say don't worry, we won't treble tuition fees - we'll double them!".

Steve Hedley, London organiser of the RMT, explained the appeal of the TUSC list: "We're in the same position as most people out there. We live in the same streets, we send out kids to the same schools".

RMT president Alex Gordon, number one candidate on the list, rounded off the rally: "The RMT has a proud tradition of fighting politically.

"There is nothing to be ashamed of about being a trade unionist and a socialist - millions of people out there are looking for an alternative.

New candidates have recently been added to the TUSC list:

Candidates are standing in a personal capacity.

A day of action at rail and bus stations was called for Tuesday 27th March - contact [email protected] to get postcards to give out at your local station, morning, daytime or evening

This version of this article was first posted on the Socialist Party website on 22 March 2012 and may vary slightly from the version subsequently printed in The Socialist.