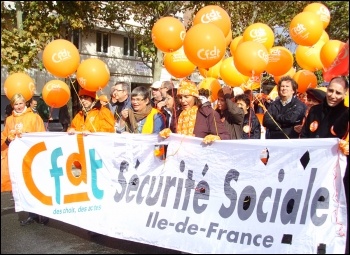 Sarkozy's downfall, alongside the crushing defeat of the pro-austerity parties in Greece, was a real turning point. Not only did he head the eighth European government to be defeated in the last year, the French and Greek elections were the most open rejection of austerity so far.

Following the massive struggle over pensions in 2010, many French workers, youth and other layers turned their attention to preventing Sarkozy's re-election.

All the polls show that many did not vote for Francois Hollande of the Socialist Party (PS) for his policies, but mainly in order to oust the arrogant, rude "bling-bling" Sarkozy.

Nevertheless Hollande's victory has created big hopes and expectations, not just in France but internationally that the tide is beginning to turn against the assault on living standards.

His programme includes a number of pledges including increasing the minimum wage, creating 150,000 youth "jobs of the future", hiring 60,000 new teachers and 5,000 police.

But can Hollande deliver what millions are hoping for and demanding?

Hollande's narrow victory was the first Socialist Party presidential success since 1988. But despite the PS's name, this is not a victory for socialism in the sense of breaking with capitalism. The PS is a party that seeks to work within capitalism.

Alongside his promised improvements Hollande also has a deficit reduction plan similar to Sarkozy's. Both Hollande and Sarkozy's economic plans are based upon a 1.7% growth next year, something which is looking increasingly unrealistic, something that will increase the markets' pressure on Hollande.

Hollande is also proposing to introduce a constitutional requirement for the government to have a balanced budget and to eliminate the budget deficit by 2017, one year later than Sarkozy planned to.

Hollande seeks to do this by saving €100 billion a year through a mixture of tax increases and spending cuts, although he has not said what will be cut.

Nevertheless his victory will have strengthened the confidence of French workers, youth and other oppressed layers by showing that the right can be defeated.

This can lead to a reawakening of the French tradition of mass movements starting from below that could force Hollande to go further than he initially planned.

Hollande and his government will face enormous pressure from markets to resist opposition to cuts and to demands for increased living standards.

But at the same time there are growing divisions among governments and capitalists over what to do. Even ratings agencies reflect this as they simultaneously demand cuts and complain that not enough is being done to stimulate the economic growth which is needed to pay back the debt.

Merkel and the German government is still standing tough, both on Hollande's call for the fiscal treaty to be re-negotiated and on Greece, but could be forced to accept some measures that attempt to alleviate the crisis.

Of all the leaders of major countries in office at the start of this crisis, only Merkel remains and it is far from certain that the present German government will survive beyond the next election due in September 2014. Thus the day after Hollande's victory Merkel spoke of the "two sides of same coin - progress is only achievable via solid finances plus growth."

As one German commentator wrote: "So far there are no realistic alternatives on the table to consolidating national budgets by making spending cuts. Hollande will have to recognize this fact within a few short weeks.

"France's new leader will get a stimulus package as an addition and supplement to the already signed fiscal pact, but that will be all. This concession has already been established by Germany's chancellor, Luxembourg leader and euro group president, Jean-Claude Juncker, and the President of the European Central Bank, Mario Draghi."

The twin pressures of the on-going economic crisis and pressure from below will put Hollande to the test. While not challenging capitalism Hollande can be pushed in conflicting directions, being forced to give concessions and to carry through attacks.

After the experiences of the PS in office during the 1981-1995 Mitterrand presidency and the 1997-2002 Jospin government many workers in France do not trust the PS, hence the enthusiastic support in the first round of this election for Mélenchon, the Left Front (FdG) candidate, and the hundreds of thousands who voted to the left of both the PS and FdG.

This was also the basis for the large votes in 2002 and 2007 for Trotskyist parties to the left of Jospin's 'Gauche Plurielle' ("Plural left", the PS and Communist party).

Now in this stormy period Hollande will be put to the test and because his government will base itself on capitalism it is inevitable that, over a period of time, a process similar to that under the Jospin government will unfold.

This will see both a radicalisation to the left creating the chance to create a new force committed to breaking with capitalism but also opportunities for the far-right National Front to use a mixture of populism, racism and nationalism to build upon the support it has already amassed.

A new stage has opened both in France and Europe.