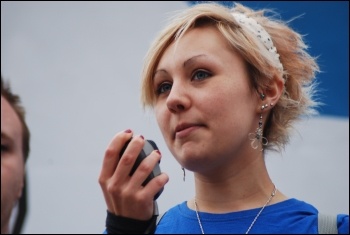 Lizi Gray, whose great grandfather was one of the original Jarrow Marchers, addresses the Jarrow March for Jobs 2011, which ended with a demonstration in London on 5 November , photo Sujeeth   (Click to enlarge)

In his election speech, Edmund called for the NUS to launch a mass campaign to defend education. He argued that the autumn demo, which delegates had already voted for at the conference, should only be the start of a programme of mass action, linked to the struggles of workers and trade unions.

When Lizi spoke, she explained that it was the snatching away of EMA student payments and the tripling of tuition fees that first 'politicised' her. She joined the hundreds of thousands of young people who walked out of their schools, colleges and universities, dealing the first blows in the fight against the Con-Dem cuts coalition. Lizi expressed her disappointment at the NUS for failing to lead this fight, and said that, if elected, she would use her position to try to ensure this mistake was not made again.

The election results reflected support for Socialist Students' programme as well as a conference with a more fighting mood than in previous years. Edmund's result was particularly close. He made it through to round 23 of 25 in the transferable voting system.

Edmund actually received more first preference votes than one of the winning candidates but lost out because other 'lefts' failed to transfer their votes to him.

The general make up of the NEC saw a slight shift to the left. Five left candidates were elected, one more than last year. However, the NEC remains dominated by Labour Students and generally right leaning independents. This means that pressure from below will be necessary to ensure that the actions delegates at NUS conference voted for are carried out.