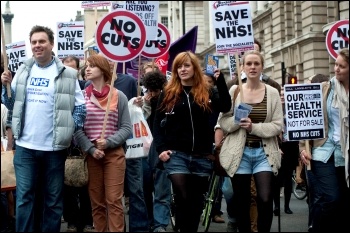 Lies about protecting the NHS helped the Tories get into government. Now the Con-Dems' destruction of the health service could trigger their downfall. Among health workers and the general public a seething anger is boiling up. Michael Griffiths writes about yet another attempt to make public service workers and users pay for the capitalist crisis.

Most NHS Trusts, like ours in Wakefield, are seeking to make more job cuts. The Royal College of Nursing has calculated that 61,000 jobs, including those of nurses, are under threat. 26,000 have gone in the last two years. Trained staff are unable to get a job, while those with a job are overworked and under huge pressure.

This is a warning to the health unions as the trust is planning to extend the scheme. 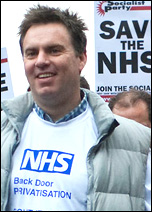 Last year, Sandwell general hospital was one of the 20 hospitals condemned by the Care Quality Commission for their treatment and care of older patients. During a spot check, an incontinent patient was found to have remained unwashed for 90 minutes, despite calling for help.

So there is clearly a staff shortage - which the trust management seems to want to solve by taking on people to provide essential care for patients, but through working for their dole. What a scandal in the 21st century! This is the thin end of a very dangerous wedge.

The trade union movement should be organising the unemployed into the unions. These sham schemes should be actively resisted with a fight for investment in real jobs, real training and decent, trade union recognised pay rates and conditions for all workers.

But health workers are fighting back against these attacks. GMB members in the NHS have just voted by 96.5% to reject the proposed changes to their pension scheme. Unite workers have also rejected these attacks and joined the strike on 10 May.

Now is the time to coordinate a vigorous campaign, including strike action and a trade union demo before the summer, to defend the NHS, defend health workers and throw out plans to extend the 'look after patients for your dole money' scheme.

Our education under attack

Council workers in Cheshire strike against attacks on pay

Back to work? How the system fails the unemployed

Building the electoral alternative in Brent

More attacks on right to campaign